The Siege of Charleston 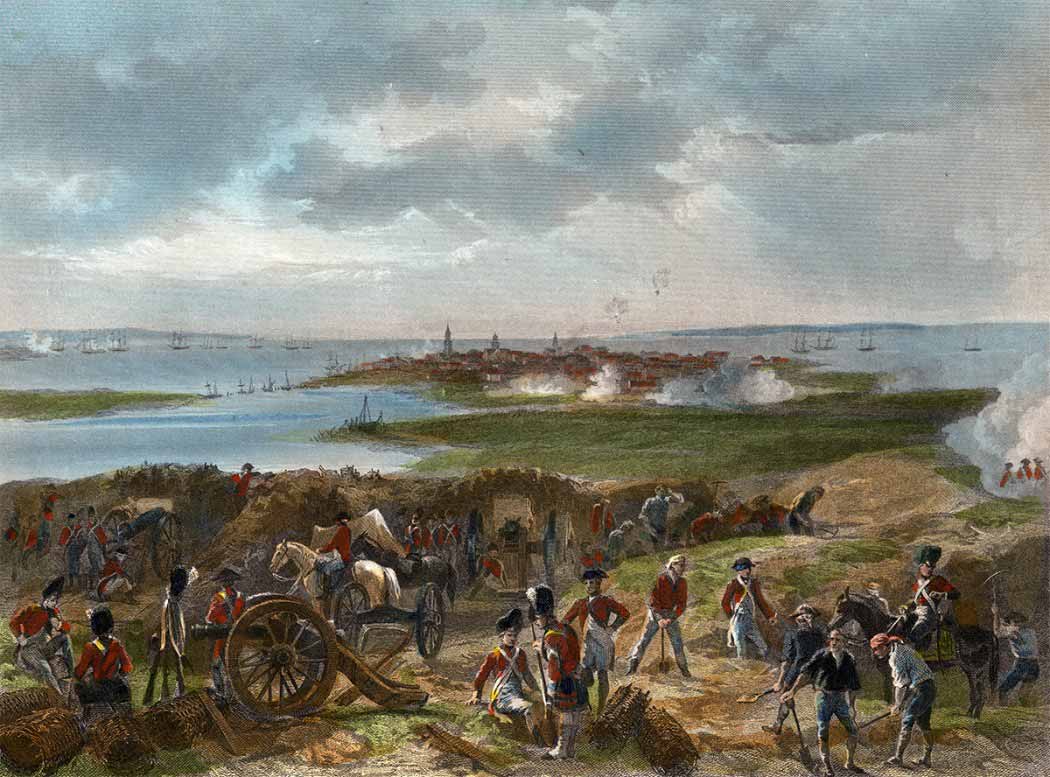 The British, following the collapse of their northern strategy and their withdrawal from Philadelphia, shifted their focus to the American Southern Colonies.

After approximately six weeks of siege, Major General Benjamin Lincoln, commanding the Charleston garrison, surrendered his forces to the British, resulting in one of the worst American defeats of the war.

Facts about the Siege of Charleston

By late 1779, two major British strategic efforts had failed. An army invading from Quebec under Lieutenant General John Burgoyne, had surrendered to the Americans under Major General Horatio Gates at the Battles of Saratoga (First and Second), compelling France and Spain to declare war on Great Britain in support of the Americans. 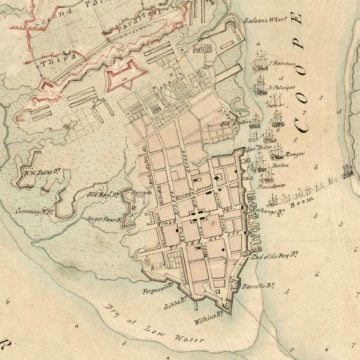 Meanwhile, a strategic effort led by General William Howe to capture the Revolutionary capital of Philadelphia had met with limited success. Having replaced his superior as Commander-in-Chief of the American Station, General Henry Clinton withdrew all his forces back to New York City to reinforce the city against a possible Franco-American attack.

Stymied by the Fabian strategy adopted by General George Washington, and, under increasing political pressure to deliver victory, the British turned to launching their "Southern Strategy" for forcing a capitulation of the Americans. The British were persuaded that there was a strong Loyalist sentiment in the south. It was expected that these Loyalists would rise against the American Patriots in large numbers.

The opening British move was the Capture of Savannah, Georgia in December 1778. After repulsing an assault on Savannah by a combined Franco-American force in October 1779, the British planned to capture Charleston, South Carolina, intending to use the city as a base for further operations in the southern colonies.

On December 26, Clinton and his second in command, Lieutenant General Charles Cornwallis, sailed southward with 8,500 troops and 5,000 sailors on 90 troopships and 14 warships. After a very stormy voyage, the fleet anchored in Savannah River on February 1.

By February 12, Clinton had landed his army 30 miles south of Charleston on Simmons Island. By 24 Feb., the British had crossed the Stono River onto James Island, and by 10 March, Cornwallis had made it to the mainland.

By March 22, they had advanced to Middleton Place and Drayton Hall, and on March 29, crossed the Ashley River.

From March 11-21, the British fortified their position which was located where the Wappoo Creek flowed into the Ashley River. They mounted artillery to shell American ships and keep the Ashley River secure. They then moved upstream and north, away from Charleston, slowly securing the plantations along the way while the Americans shadowed them from across the river. 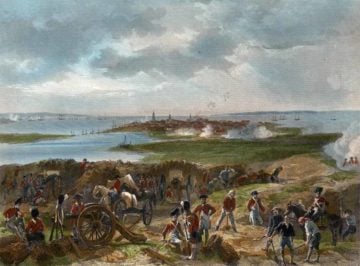 Siege of Charleston on May 1780

On March 29, under the cover of fog , the British crossed the Ashley River upstream from the heavily fortified Ashley Ferry and established themselves on Charleston Neck. When the Americans learned that the British were on the Neck, they abandoned their breastworks at Ashley Ferry.

On April 1, the British had moved down into position to begin their siege works. While the British slowly closed in, naval maneuvering in Charleston Harbor for the Americans was a disaster. In December 1779, 4 frigates had arrived under the command of Commodore Abraham Whipple and were joined by 4 ships from South Carolina and 2 French ships. There were 260 guns afloat and 40 guns at Fort Moultrie.

However, even before the British arrived, Whipple informed Lincoln that the flotilla could not defend the entrance to Charleston Harbor. Lincoln questioned Whipple's conclusion, but Whipple was backed up by a naval board. Whipple chose to first withdraw to the mouth of the Cooper River. Meanwhile the British began their approach on March 20. When Whipple saw the size of the British attack fleet, he scuttled the ships at the entrance of the river 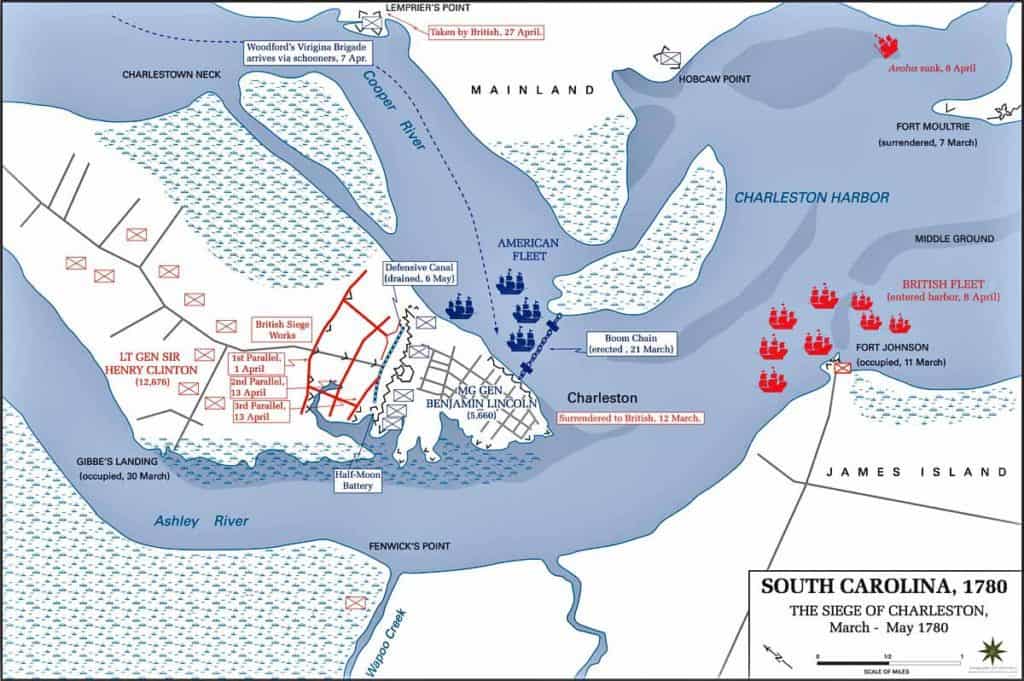 Map of the Siege of Charleston 1780

On April 2, siege works were begun about 800 yards from the American fortifications. During the first few days of the siege, the British operations were under heavy artillery fire. On April 4, they built redoubts near the Ashley and Cooper Rivers to protect their flanks.

On April 6, a warship was hauled overland from the Ashley River to the Cooper River to harass crossings by the besieged to the mainland.

On April 8, the British fleet moved into the Harbor under fire only from Fort Moultrie.

On April 12, Clinton ordered Tarleton and Ferguson to capture Monck's Corner, which was a crossroads just south of Biggins Bridge near the Santee River. Brigadier General Isaac Huger was stationed there 500 men under orders from Lincoln to hold the crossroads so that communications with Charleston would remain open.

On April 13, during the evening, Tarleton gave orders for a silent march. Later that night, they intercepted a messenger with a letter from Huger to Lincoln and thus learned how the rebels were deployed. 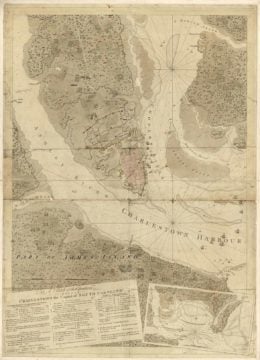 On April 14, at 3:00 A.M., the British reached the American post, catching them completely by surprise and quickly routing them. Following the skirmish, the British fanned out across the countryside and effectively cut off Charleston from outside support. South Carolina Governor John Rutledge left Charleston on April 13.

On April 21, a parlay was made between Lincoln and Clinton, with Lincoln offering to surrender with honor. That is, with colors flying and marching out fully armed, but Clinton was sure of his position and quickly refused the terms. A heavy artillery exchange followed.

On April 23, Cornwallis crossed the Cooper River and assumed command of the British forces blocking escape by land.

On April 24, the Americans ventured out to harass the siege works. The lone American casualty was Tom Moultrie, brother of Brigadier General William Moultrie.

On April 29, the British advanced on the left end of the canal that fronted the city's fortifications with the purpose of destorying the dam and draining the canal.

The Americans knew the importance of that canal to the city's defenses and responded with steady and fierce artillery and small arms fire. By the following night, the British had succeeded in draining some water.

By May 4, several casualties had been sustained and the fire had been so heavy that work was often suspended.

On May 5, the Americans made a countermove from their side, but by May 6, almost all of the water had drained out of the heavily damaged dam and plans for an assault began. On that same day, Fort Moultrie had surrendered.

On May 8, Clinton called for unconditional surrender from Lincoln, but Lincoln again tried to negotiate for honors of war. 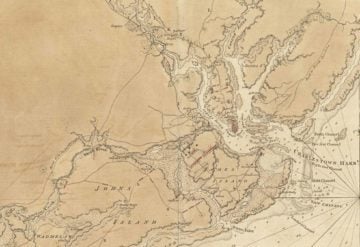 On May 11, the British fired red-hot shot that burned several homes before Lincoln finally called for parlay and to negotiate terms for surrender. The final terms dictated that the entire Continental force captured were prisoners of war.

On May 12, the actual surrender took place with Lincoln leading a ragged bunch of soldiers out of the city.

The senior officers, including Lincoln, eventually were exchanged for British officers in American hands. For all others in the Continental army, a long stay on prison boats in Charleston Harbor was the result, where sickness and disease would ravage them.

The defeat left no Continental Army in the South and the country wide open for British taking. Even before Lincoln surrendered, the Continental Congress had already appointed Gates to replace him.

The British quickly established outposts in a semicircle from Georgetown to Augusta, Georgia, with positions at Camden, Ninety-Six, Cheraw, Rocky Mount and Hanging Rock in between. Parole was offered to back country rebels and many accepted, including Andrew Pickens. Soon after securing Charleston, Clinton gave command of the Southern Theatre to Cornwallis and on June 5, he sailed north back to New York.

Clinton's one order to Cornwallis before he left, was to maintain possession of Charleston above all else. Cornwallis was not to move into North Carolina if it jeopardized this holding. Clinton also had ordered that all militia and civilians be released from their parole. But in addition, they must take an oath to the Crown and be at ready to serve when called upon by His Majesty's government. This addition angered many of the locals and led to many deserting or ignoring the order and terms of their parole.

Prison hulks awaited the majority of the Continental prisoners, while parole was granted to the militia and civilians who promised not to take up arms. However, this also meant there no longer existed an American army in the South.

Following the surrender, the captured ordnance was brought to a powder magazine. A Hessian officer warned that some of the guns might still be loaded, but he was ignored. One prematurely fired, detonating 180 barrels of powder, further discharging 5,000 muskets in the magazine. The accident killed approximately 200 people and destroyed six houses.

The prisoners of the siege were diverted to multiple locations, including prison shops, the old barracks where the College of Charleston is today, and the Old Exchange and Provost "Dungeon".

The defeat was a serious blow to the American cause. It was the largest surrender of an American force under arms, until the 1862 surrender of Union troops at Harper's Ferry during the Antietam Campaign. The surrender left no substantial army in the South, and the colonies were wide open for a British advance. The British troops consolidated their hold, and had driven the remaining Continental Army troops from South Carolina consequent to the May 29 Battle of Waxhaws. 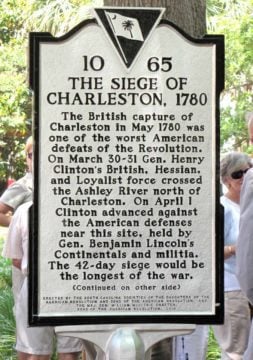 On June 5, Clinton sailed back to New York City, believing his presence necessary to defend against a potential Franco-American attack, leaving command of the southern theatre to Lord Cornwallis, with orders to reduce opposition in North Carolina.

Though the effects of the surrender at Charleston was substantial, the British err in strategy soon became apparent. There was no popular uprising of Loyalists that the British command had been assured would happen, making control of the countryside difficult. Instead, resistance in South Carolina degenerated into a period of chaotic guerrilla warfare in the outlying areas.