The Battle of Savannah 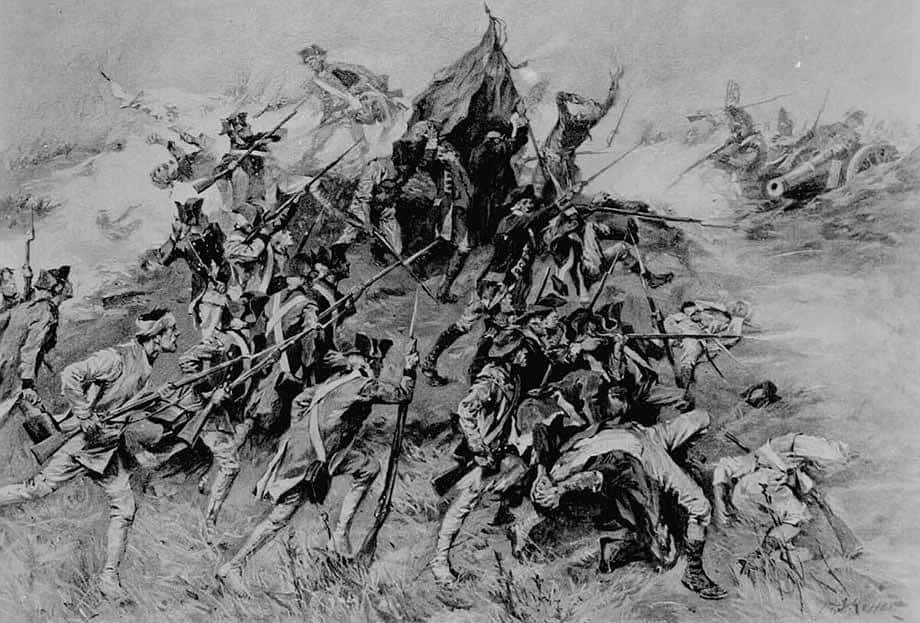 The Capture of Savannah, or sometimes the First Battle of Savannah (because of a siege in 1779), pitted local American Patriot militia and Continental Army units, holding the city, against a British invasion force. The British seizure of the city led to an extended occupation and was the opening move in the British southern strategy to regain control of the rebellious Southern provinces by appealing to the relatively strong Loyalist sentiment there.

General Henry Clinton, the commander-in-chief of the British forces based in New York City, dispatched Colonel Campbell and a 3,100-strong force from New York to capture Savannah, and begin the process of returning Georgia to British control. He was to be assisted by troops under the command of Brigadier General Augustine Prevost that were marching up from Saint Augustine in East Florida.

On December 23, after landing near Savannah, Campbell assessed the American defenses, which were comparatively weak, and decided to attack without waiting for Prevost. Taking advantage of local assistance, he successfully flanked the American position outside the town, captured a large portion of Major General Robert Howe's army, and drove the remnants to retreat into South Carolina.

Campbell and Prevost followed up the victory with the capture of Sunbury and an expedition to Augusta. The latter was only occupied by Campbell for a few weeks before he retreated back to Savannah, citing insufficient Loyalist and Native American support and the threat of Patriot forces across the Savannah River in South Carolina.

The British held off a Franco-American siege in 1779, and held the city until late in the war.

Facts about the Battle of Savannah 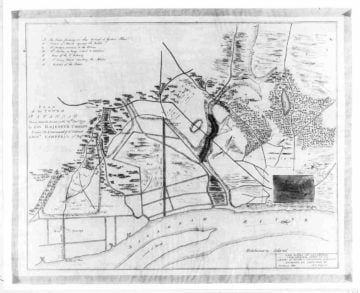 Map of the capture of Savannah

In the fall of 1778, Colonel McIntosh, who had been left in command of the town after the repulse of the British in March 1776, notified Howe, commander of the American forces in this section, with headquarters at Charleston, that an advance of the British upon Savannah was anticipated, and that his small force, 250 men, with 100 for duty, was inadequate to defend the place. Howe came over and took command. He had about 500 regulars and 350 militia.

Howe learned that the British had planned for Colonel Prevost to advance from East Florida and arrive near Savannah in time to cooperate with the naval fleet, under Sir Hyde Parker and the troops under Campbell, to be sent from New York. Prevost advanced as far as Sunbury. The Americans made a show of being in strong force and Prevost retreated.

Howe returned to Savannah and ordered all of the troops to assemble there. The town was in an almost defenseless condition, excepting from the water side. The fort on the eastern end of the bluff, where the gas house now stands, had been considerably enlarged, more guns mounted, and made quite formidable. It was named Fort Wayne, in honor of Brigadier General Anthony Wayne.

By December 27, the whole of the British fleet had anchored off Tybee. The vessels composing the armed squadron were the Phoenix, 44 guns; the Rose and Fowey, 24 guns each; the Vigilant, 28 guns; and the brig Keppel, the sloop Greenwich and the galley Comet. The transports brought about 3,500 men. Howe had about 900 men to oppose their force. The British were not at first aware of the weakness of the Americans and were disposed to wait the arrival of Prevost's command before commencing the assault upon the town.

To gain information, Campbell sent a boat's crew ashore to capture some of the inhabitants. The crew landed on Wilmington Island and took two men prisoner, who informed them of the exact condition of the Americans. Believing the information received to be correct, Campbell decided to attack without delay. 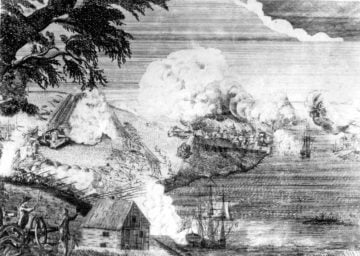 On December 28, the squadron sailed up within two miles of Savannah, opposite to Girardeau's Plantation, and preparations were made to land early the next morning. Howe was not correctly informed concerning the strength of the enemy, and believing he could cope with them, determined to defend the town.

Observing this movement of the enemy, he rightly concluded that the troops would land below Brewton Hill 4 and advance upon the town by the great road, now known as the Thunderbolt Road, and Captain John C. Smith, with his company of South Carolinians, was sent to the hill to watch the enemy.

The marsh on the east side of Savannah was then much wider and more difficult to cross than now. On the high ground west of the marsh General Howe placed his command so as to cover the great road, which crossed the marsh by a narrow causeway, and burned the bridge over the rivulet which ran through the center of the marsh.

To present still further obstructions, a deep ditch was dug three hundred yards west of the marsh and filled with water. The army was divided into two brigades; the first, commanded by Colonel Elbert, constituted the left, and the other, under Colonel Huger, the right wing. Five pieces of cannon were posted in front of the causeway.

To the right of the position of the Americans, a small path led through the swamp to the high grounds on the opposite side. This path was pointed out to Howe by Colonel Walton as a place which should be guarded, but Howe, thinking differently, paid no attention to the suggestion. About what is now the corner of Liberty and Bull streets were the New barracks. The roads to White Bluff and the Ogeechee River united near the barracks, and Colonel Walton, with 100 militia, was posted there. 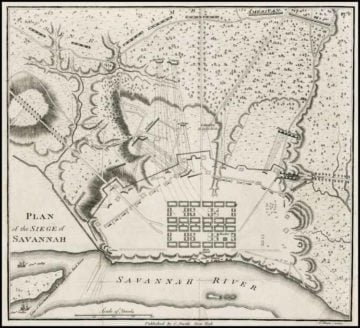 On December 29, Campbell selected Girardeau's Plantation, located about 2 miles below the city, for the landing place. When word reached Howe that the landing had started, he sent a company of Continentals to occupy the bluffs above the landing site. Campbell realized that the bluffs would need to be controlled before the majority of his forces could land, and dispatched two companies of the 71st Regiment to take control of them.

The Continentals opened fire at about 100 yards; the British, rather than returning fire, advanced rapidly with bayonets fixed, denying the Continentals a second shot. The Continentals retreated, having killed four and wounded five at no cost to themselves. By noon, Campbell had landed his army and began to proceed cautiously toward the city.

Howe held a council that morning, and ground was chosen at which to make a stand. About one-half mile south of the city, he established a line of defense in the shape of an open "V", with the ends anchored by swampy woods.

When Campbell's advance companies spotted Howe's line around 2:00 PM, the main body stopped short of the field and Campbell went to see what he was up against. He viewed Howe's defenses as essentially sound, but a local slave told him that there was a path through the swamp on Howe's right. 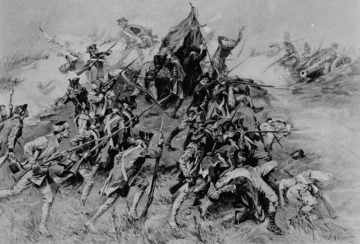 Campbell ordered Sir James Baird to take 350 light infantry and 250 New York Loyalists and follow the slave through the swamp, while he arrayed his troops just out of view in a way that would give the impression he would attempt a flanking maneuver on Howe's left. One of his officers climbed a tree to observe Baird's progress.

True to the slave's word, the trail came out near the Continental barracks, which had been left unguarded; the Continentals were unaware they had been flanked. When they reached position, the man in the tree signaled by waving his hat, and Campbell ordered the regulars to charge.

The first sounds of battle Howe heard were musket fire from the barracks, but these were rapidly followed by cannon fire and the appearance of charging British and German troops on his front. He ordered an immediate retreat, but it rapidly turned into a rout.

His untried troops hardly bothered to return fire, some throwing down their weapons before attempting to run away through the swampy terrain. Campbell reported that "It was scarcely possible to come up with them, their retreat was rapid beyond Conception."

The light infantry in the Continental rear cut off the road to Augusta, the only significant escape route, forcing a mad scramble of retreating troops into the city itself. The Georgia soldiers on the right attempted to find a safe crossing of Musgrove Creek, but one did not exist, and many of the troops were taken prisoner.

Soldiers who did not immediately surrender were sometimes bayoneted. Huger managed to form a rear-guard to cover the escape of a number of the Continentals. Some of Howe's men managed to escape to the north before the British closed off the city, but others were forced to attempt swimming across Yamacraw Creek; an unknown number drowned in the attempt. 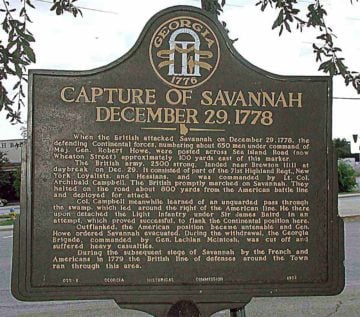 When Howe's retreat ended at Purrysburg, South Carolina, he had 342 men left, less than half his original army. Howe would receive much of the blame for the disaster, with Brigadier General William Moultrie arguing that he should have either disputed the landing site in force or retreated without battle to keep his army intact. He was exonerated in a court martial that inquired into the event, although the tribunal pointed out that Howe should have made a stand at the bluffs or more directly opposed the landing.

Prevost arrived from East Florida in mid-January, and shortly after sent Campbell with 1,000 men to take Augusta. Campbell occupied the frontier town against minimal opposition, but by then Major General Benjamin Lincoln had begun to rally support in South Carolina to oppose the British.

On February 14, Campbell abandoned Augusta, the same day a Loyalist force en route to meet him was defeated in the Battle of Kettle Creek. Although Patriot forces following the British were ambushed in the March 3 Battle of Brier Creek, the Georgia backcountry remained in Patriot hands.

Campbell wrote that he would be "the first British officer to [rend] a star and stripe from the flag of Congress". Savannah was used as a base to conduct coastal raids which targeted areas from Charleston, South Carolina to the Florida coast. In the fall of 1779, a combined French and American siege to recapture Savannah failed with significant casualties.

Control of Georgia was formally returned to its royal governor, James Wright, in July 1779, but the backcountry would not come under British control until after the 1780 Siege of Charleston. Patriot forces recovered Augusta by siege in 1781, but Savannah remained in British hands until July 11, 1782.