The Battle of Moore's Creek Bridge

In the Battle of Moores Creek Bridge was fought near Wilmington, in present-day Pender County, North Carolina.

In a brief early morning engagement, a charge across the bridge by sword-wielding Loyalist Scotsmen was met by a barrage of musket fire. One Loyalist leader was killed, another captured, and the whole force was scattered. In the following days, many Loyalists were arrested, putting a damper on further recruiting efforts. North Carolina was not militarily threatened again until 1780, and memories of the battle and its aftermath negated efforts by Major General Charles Cornwallis to recruit Loyalists in the area in 1781.

The victory ended British authority in North Carolina and provided an important boost to Patriot morale. Within two months of the American victory, on April 12, North Carolina became the first colony to vote in favor of independence from Britain.

Facts about the Battle of Moore's Creek Bridge

The news of the Battle of Lexington and Battle of Concord, received in North Carolina a month later, further weakened British authority. Unable to stem the tide of revolution in the colony, Royal Governor Josiah Martin abandoned New Bern and fled to Fort Johnston on the lower Cape Fear, arriving there on June 2. Within 6 weeks, the North Carolina militia forced him to flee again, this time offshore to the British warship HMS Cruizer, as the fort burned behind him.

In exile, Martin laid plans of the reconquest of North Carolina. First, he would raise in that colony an army of 10,000 men, two-thirds of them Highlanders and Regulators with strong Loyalist feelings. Next, this army would march to the coast and rendezvous with a powerful expeditionary force under Cornwallis, General Henry Clinton, and Gen. Sir Peter Parker.

These combined army and naval forces were to concentrate at Brunswick, a seaport town below Wilmington, by February 15. Together they would re-establish British authority in the Carolinas, striking wherever the rebellion showed itself. Martin persuaded his superiors in London and Commander-in-Chief Gen. General Thomas Gage that this host could easily restore order. The British Ministry approved the plan and dispatched orders to the several commanders.

On January 10, Martin called upon all loyal subjects to unite to put down "a most daring, horrid, and unnatural Rebellion." Six months earlier, Gage had sent Colonel Donald MacDonald and Major Donald McLeod to North Carolina to recruit a Highland battalion. Martin now appointed MacDonald a brigadier general and McLeod a lieutenant colonel in the Loyalist militia and directed them and others to enlist men.

To all Highlanders who pledged service to the Crown, the British government promised 200 acres of land, cancellation of land fees, and tax exemption for 20 years. These terms, and Martin's efforts among other groups, brought in recruits, though not nearly as many as had been expected., The call went out for Loyalists to assemble under MacDonald near Cross Creek and then march to the coast.

On February 15, when the force was organized, there were about 1,500 men present. While Martin was at sea, the Americans began to mobilize their forces. Since Martin was technically out of the colony, the Americans, in August and September 1775, set up a Provincial Council to govern in his place. Upon the recommendation of the Continental Congress, two regiments of the Continental Line and several battalions of minutemen and militia were raised.

At the news that the Loyalists were assembling at Cross Creek , the Americans began gathering their forces. In Wilmington, they threw up breastworks and prepared for fighting. In New Bern, authorities mustered the district's militia, under Colonel Richard Caswell, and ordered it to join with other militia in countering the Loyalists. Colonel James Moore was given command. The Loyalists' plan was to advance along the southwest side of the Cape Fear River to the coast, provision the British troops arriving by sea, and then join them in conquering the colony.

On February 20, MacDonald began his movement toward the coast. Blocked by Moore at Rockfish Creek, he marched eastward in the general direction of Caswell's force, crossed the Cape Fear River, and proceeded toward the Negro Head Point Road, a route into Wilmington along which he expected little opposition.

Outmaneuvered by MacDonald's march tactics, Caswell withdrew from defending Corbett's Ferry on the Black River in order to "take possession of the Bridge upon Widow Moore's Creek", some 20 miles above Wilmington and a place the Loyalists had to cross on their way to the coast.

After sending Colonel Alexander Lillington to join Caswell, Moore fell back toward Wilmington, hoping to fall on the rear of MacDonald's column as Caswell obstructed him in front.

On February 25, when Lillington arrived at Moore's Creek Bridge, he quickly saw the position's defensive advantages. Moore's Creek was a dark and  sluggish stream about 35 feet wide. It wound through swampy terrain and could be crossed in the vicinity of only over this bridge.

To dominate the crossing, Lillington built a low earthwork on a slight rise overlooking the bridge and its approach from the east. Joining him the next day, Caswell sent his men across the bridge to throw up earthworks there. 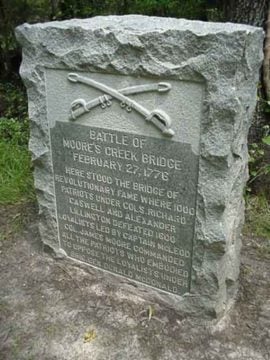 On February 26, in the evening, the Americans straddled the bridge. Lillington with 150 men waited on the east side of the Moore's Creek, and Caswell with 850 men were camped on the west. MacDonald's Loyalists, 1,600 strong but with arms for less than half that many, camped 6 miles away.

MacDonald had lost the race to the Moore's Creek Bridge and now had to decide whether to avoid fighting once more or to cut through their opponents. At a council-of-war, the younger leader carried the debate, and eventually all agreed that the enemy should be attacked. An element in the decision was the report by a scout that Col. Caswell's position lay on their side of the river and was thus vulnerable.

On February 27, at 1:00 A.M., the Loyalists set out on their march, with a party of 75 picked broadswordsmen under Captain John Campbell in the lead. By now, MacDonald had fallen ill, and McLeod was in command. The going was slow, for the route lay through thickets and swampy ground. During the night, Caswell abandoned the camp and withdrew across the creek. Once on the other side, his men removed the planks and greased the girders. Posting artillery to cover the bridge, they waited in darkness for the advancing Scots.

An hour before dawn, the Loyalists came upon Caswell's deserted camp and found the fires burning low. Moving on to nearby woods, Col. McLeod regrouped his men and passed the rallying cry - "King George and Broad Swords" - along the line. There, they waited for daybreak. Suddenly gunfire sounded near the bridge.

Though it was not yet light, McLeod couldn't wait any longer. Three cheers rang out, the signal for the attack, and the Loyalists rushed the partly demolished bridge with broadswords out and bagpipes skirling. Picking their way over the bridge and onto the opposite bank, they got within 30 paces of the American earthworks before they were met by a withering fire of musketry and artillery.

Nearly all the advance party were cut down, and the whole force soon retreated. It was all over in a few minutes. Pursuit by the Americans turned the British repulse into a rout.

Within weeks, the Americans had captured "all suspected person" and disarmed them. The spoils included 1,500 rifles, 350 "guns and shot-bags," 150 swords and dirks, and £15,000 sterling. Some 850 "common Soldiers" and most of the Loyalists were captured. The British leaders were imprisoned or banished from the North Carolina colony. The British soldiers were paroled to their homes.

Though the battle was a small one, the implications were large. The American victory demonstrated the surprising strength in the countryside, discouraged the growth of Loyalist sentiment in the Carolinas, and spurred revolutionary feeling throughout the American colonies