The Battle of Cape Spartel 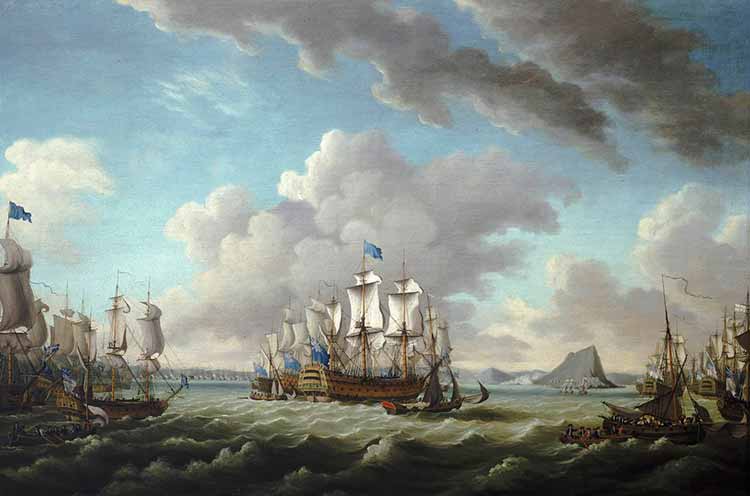 On October 10, there was a tempest and some of the Franco Spanish ships, which were anchored in the vicinity of Algeciras, were damaged, although none was sunk. Howe´s squad, that escorted a Gibraltar bound merchant convoy, showed up the next day and, owing to that storm, was pushed way beyond the Rock and into the Mediterranean. That very day and taking advantage of a WNW wind, De Córdoba´s fleet pulled anchor and started the pursuit while the Spanish admiral sent minor units close to the British squadron.

On October 17, after several days of fighting westerly winds and currents, the convoy managed to enter Gibraltar.

Facts about the Battle of Cape Spartel 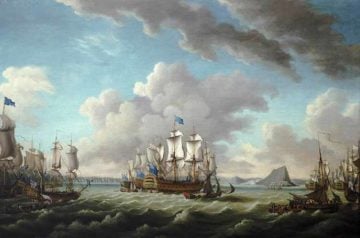 On October 20, both fleets sighted each other before sunrise, some 6 leagues off cape Spartel. De Córdoba signalled general chase disregarding division places. The British order of battle was starboard of the Franco Spanish.

At 1:00 P.M.,and after Cordoba´s flagship 112 Santísima Trinidad handled to reach the center of the huge combined line coming from the end, both squads were about two miles away. The British reduced sail in order to tighten their order of battle.

At 5:45 P.M., the van of the Franco Spanish shot off. The British returned fire while Howe flashed retreat all sail, making at least 14 Franco Spanish ships redundant, among them two 3-deckers. Besides, no English sail was really engaged despite the efforts of de Córdoba´s units, which chased the fleeing British fleet.

On October 21, both squadrons were some 4 leagues apart. De Córdoba ordered damages repaired and get ready to resume battle. Nevertheless, no fire was opened as the next day the British disappeared up the ocean. From the initial 46, only 34 Franco Spanish ships could eventually fire. Howe´s fleet made sure the merchant convoy reached harbor rather than engaging the enemy as when both squadrons met the British admiral called his sails out of action.

Gibraltar had been under a persistent sea siege by the Franco Spanish ships and needed supplies badly. Howe succeeded in his main aim and returned to England with some damages and casualties to explain the Admiralty why he could not defeat the enemy. Howe´s campaign was probed and he was severely reprimanded. In future encounters with their enemies, the British fleets would engaged them with ferocity, no matter what the proportion was, in fear of their commanders-in-chief would be removed forever.

Sail advantage enabled the British to dodge action and from then on the Spanish navy struggled to build faster ships to avoid these situations or that of 1870 Cape St Vincent –or moon light- battle when Rodney´s 18-ship squad chased down the escaping De Lángara´s 11-ship fleet.