The Battle of Blue Licks 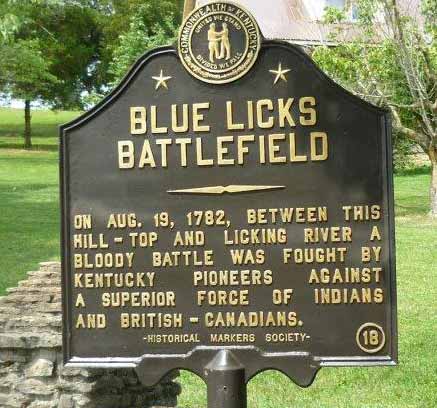 The Battle of Blue Licks was the last major battle of the war. The battle, which took place in the frontier country of northern Kentucky occurred almost 10 months after the surrender of the British commander Lieutenant General Charles Cornwallis, following the Battle of Yorktown. It was a decisive victory for a combined invasion force of 1,000 British regulars and Native Americans from the Ohio nations over a force of 180 Kentucky militia, civilians trained as soldiers but not part of the regular army men.

It is considered by historians to be the “low point” for the Americans in the struggle for possession of the western country beyond the Appalachian Mountains, a mountain range in the eastern United States extending from Quebec to the Gulf of Mexico.

It was the last victory for the Loyalists and Natives during the frontier war.

Facts about the Battle of Blue Licks 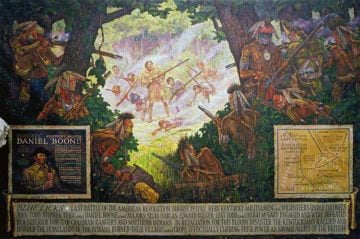 Although the main British army under Cornwallis had surrendered at Yorktown in October 1781, virtually ending the war in the east, fighting on the western frontier continued. Aided by the British garrison at Fort Detroit, Indians north of the Ohio River redoubled their efforts to drive the American settlers out of western Virginia (now Kentucky and West Virginia).

In July, a meeting took place at the Shawnee villages near the headwaters of the Mad River in the Ohio Country, with Shawnees, Delawares, Mingos, Wyandots, Miamis, Ottawas, Ojibwas, and Potawatomis in attendance. As a result, 150 British rangers under Captain William Caldwell (of Butler’s Rangers) and some 1,100 Indian warriors supervised by Pennsylvania Loyalists Alexander McKee, Simon Girty, and Matthew Elliott set out to attack Wheeling, on the upper Ohio River. This was one of the largest forces sent against American settlements during the war.

The expedition was called off, however, when scouts reported that a force under George Rogers Clark, whom the Indians feared more than any other commander, was about to invade the Ohio Country from Kentucky. Caldwell’s army returned to the Mad River to oppose the invasion, but the attack never came. In fact, Clark did have a large armed boat patrolling the Ohio River, but he had no plans to invade. Most of the Indian warriors returned to their homes.

Caldwell and about 50 Loyalists, supported by 300 Indians, crossed the Ohio River into Kentucky. They meant to surprise and destroy the settlement of Bryan Station, but the settlers discovered them and took shelter within their stockade. Caldwell and McKee’s force laid siege to Bryan Station on August 15, 1782, killing all of the settlers’ livestock and destroying their crops, but withdrew after two days when they learned that Kentucky militiamen were on the way. Caldwell had lost five Indians killed and two wounded during his short siege.

On August 18, the militia arrived at Bryan Station. The force included about 47 men from Fayette County and another 135 from Lincoln County. The highest-ranking officer, Colonel John Todd of Fayette County, was in overall command, assisted by Lieutenant Colonel Daniel Boone, the famed frontiersman. Lieutenant Colonel Stephen Trigg and Major Hugh McGary led the Lincoln County contingent. Benjamin Logan, colonel of the Lincoln militia, was gathering men and had not yet arrived.

The militiamen could pursue the raiders immediately, to keep them from escaping, or they could wait for Logan to arrive with reinforcements. Daniel Boone advised waiting for Logan, who was only a day away, but others urged immediate action, pointing out that the enemy force had a 40-mile lead on them. Boone felt compelled to go along. The Kentuckians set out on horseback over an old buffalo trail before making camp at sunset. 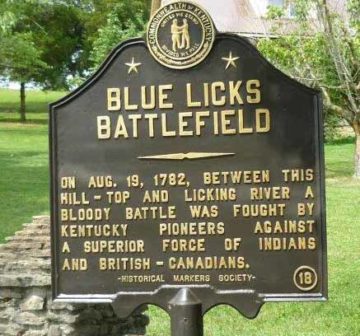 The plan was to forgo attacking the Americans at the fortified position in Wheeling but instead to attack in central Kentucky, where an invasion would not be suspected. The plan was specifically to deceptively attack the small American settlement at Bryant’s Station with a small decoy force of Native Americans.

The Americans at the nearby larger settlement of Lexington would necessarily send out a relief party, the size of which could be judged. The fleeing Native Americans would then lure the Americans into an ambush by the larger British and Native American force, which numbered approximately 1,000 men.

The plan was enormously successful. The bulk of the British and Ohio nations force hid at Blue Licks, a salt lick on the Licking River, while a small party attacked Bryants Station, purposely allowing a few to escape to notify the Kentuckians at Lexington. A force of approximately 180 Kentuckians, under a group of various leaders in cooperation set out in relief.

Daniel Boone, who led a force of 45 militia from Fayette County, as well as another major contingent from Lincoln County and under the leadership of Stephen Trigg who was assisted by Hugh McGary of Harrodsburg, who had lost his family in an attack by the Indians 5 years before the battle.

Boone had grown increasingly suspicious of a trap from the obvious trail left by the fleeing Native Americans. At the officer’s council, however, McGary was insulted at the implication of cowardice on his part and impulsively led a charge across the river. The ambush resulted in hand-to-hand combat. The contingent, including Daniel Boone, was ambushed in a ravine, and within a few minutes, the out-numbered Kentuckians were driven in panic back across the Licking River.