The city of New London served as a center of privateering ventures against British shipping during the war. General Henry Clinton, the British commander-in-chief in North America, attempted to deal with that problem by authorizing a raid on the offending port, to be led by Brigadier General Benedict Arnold.

Arnold had been the Patriots' most successful military leader early in the war, but deserted the cause in a bungled attempt to betray West Point in 1780. In truth, Arnold was not all that welcome on the British side and Clinton gave him assignments that took him out of the headquarters in New York. 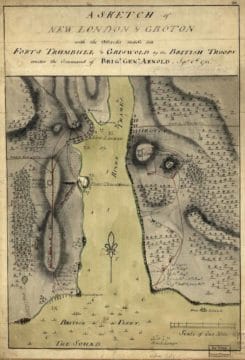 On September 6, shortly after dawn, Arnold led 800 regular British soldiers into the New London harbor at the mouth of the Thames River. A portion of the army went into the town, met little resistance and commenced the destruction by fire of goods stockpiled in the waterfront warehouses.

Other soldiers turned their attention to Fort Griswold, an American installation located across the river from New London on Groton Heights. A small force of Connecticut militia in the fort was led by Lieutenant Colonel William Ledyard, who believed that reinforcements were on the way and dismissed two orders to surrender from the British.

Two assaults on the fort followed and were met by withering fire from the militia. A third charge, however, breached the walls and Ledyard quickly recognized the futility of his situation.

According to the American rendition of events, the colonel presented his sword as a token of surrender to a Loyalist officer, who accepted it and promptly ran Ledyard through. Meanwhile in the town, the destruction of property got out of hand. A store of gunpowder exploded, which provided a huge boost to the conflagration. Then a change of wind took the flames into the main part of the city.

By the time Arnold withdrew his soldiers, more than 140 buildings were ablaze.