The Battle of Lindley's Mill/Cane Creeks

Facts about the Battle of Lindley's Mill/Cane Creeks

On September 6, Tory Colonel David Fanning made a call for volunteers. Within a short time, he had collected 950 men under his command. He decided on a plan to capture Governor Burke. Fanning organized his men and started his march. After marching all day and night, they would reach Hillsboro the next day.

The Battle of Lindley's Mill/Cane Creek was also known as the Hillsboro Raid. 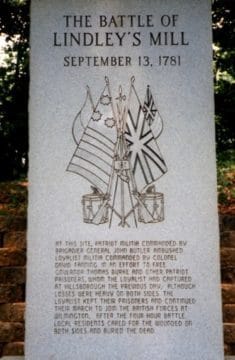 On September 12, in the morning, Fanning attacked Hillsboro and took possession of the place after a small skirmish. Of the American prisoners was his prize, Burke himself. Along with Burke, Fanning also captured the council, several Continental officers and enlisted troops. Fanning was also able to liberate a number of Loyalist and British soldiers that had been held prisoner.

At noon, Fanning and his troops left Hillsboro. They had traveled 18 miles when they were attacked by an American force at Cane Creek. The American force comprised of 400 Continentals, commanded by Colonel Maybin and Brigadier General John Butler. There was soon a fight that would last for 4 hours.

Fanning saved his expedition by his skillfull handling of the situation and eventually routed the American force. In the end, Fanning was still in possession of his prisoners but was also seriosly wounded.

While Fanning and 60 of his Tories had to be left behind, Lieutenant Colonels Archibald McDugald and Archibald McKay, and Major John Ranes took over command of the Tory force and succeeded in eluding the American pursuit with the rest of the expedition. Four days later, the Tories linked up with the relief column from Wilmington, commanded by Colonel J.H. Craig.