The Battle of Johnstown (Second)

Facts about the Battle of Johnstown (Second)

On October 24, Major John Ross had led his force of British, Germans, Tories, and Indians up the Mohawk Valley to within 12 miles of Schenectady. There, he quickly brushed aside some American militia. At 2:00 P.M., he entered Johnstown.

Colonel Marinus Willett had his 400-man American force march all through the night to catch up with Ross. 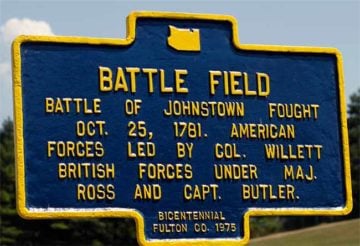 On October 25, Willett made contact with the British at Johnstown around dark. Willett sent Colonel Aaron Rowley to envelop the British with a force of New York troops and militia while his main body made an attack on the British front. Willett thought that he had the upper hand until the British captured his one cannon and stripped its ammunition cart before the Americans could retake it. The miltia on the American right flank panicked and withdrew.

Ross claimed that he had Willett almost surrounded and that only the darkness saved the American force from being annihilated. Ross then retreated 6 miles and Willett did not pursue the British for 3 days.