The Battle of Eutaw Springs 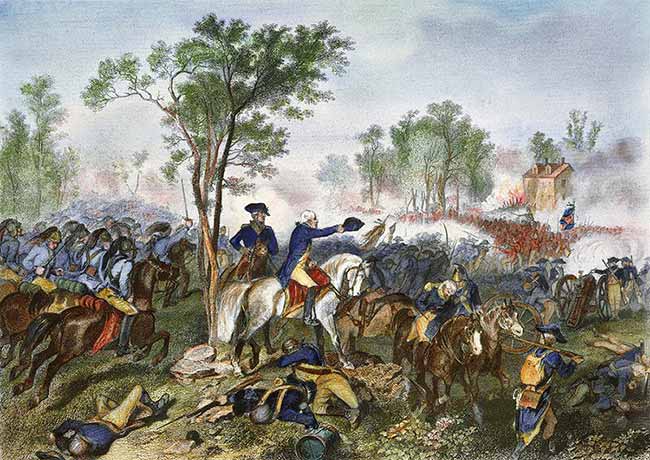 The Battle of Eutaw Springs was the last major engagement of the war in the Carolinas. Both sides claimed victory.

Facts about the Battle of Eutaw Springs

In early 1781, Major General Nathanael Greene of the Continental Army began a campaign to end British control over the South Carolina backcountry. His first major objective was the capture of the British controlled village of Ninety Six.

On May 22, Greene laid siege to the fortified village. After nearly a month, Greene became aware that reinforcements under Colonel Francis Rawdon were approaching from Charleston. Forces under Greene's command assaulted Ninety Six on June 18, but were repelled. To avoid facing the force commanded by Rawdon, Greene retreated toward Charlotte, North Carolina.

Rawdon pursued Greene for several days, but was compelled to abandon the pursuit because his men were exhausted by days of forced marching and he lacked sufficient supplies to continue. Despite the fact Ninety Six was the only remaining inland British outpost after the fall of Augusta, Georgia, Rawdon decided to burn and abandon it, and withdrew the garrison to Charleston. In poor health, Rawdon sailed for England in late August, leaving Charleston under the command of Colonel Alexander Stewart.

On July 16, Greene moved his army, exhausted by many days of marching and combat, to a campsite on the High Hills of Santee, allowing his main force to rest while awaiting reinforcements. Marion and Sumter continued to harass the British in a "war of posts". On August 23, his force moved towards Camden to cross the Wateree River, and then Howell's Ferry to cross the Congaree River. By September 4, they were camped at Fort Motte, then Stoudenmyer's Plantation on September 5-6.

On August 13, Colonel Stewart had led a force of 2,000-2,300 men from Orangeburg to Thompson's Plantation, south of the Congaree River. He then fell back to Eutaw Springs on August 27, about 2 miles east of present-day Eutawville, then in Charleston District (but both now in Orangeburg County). 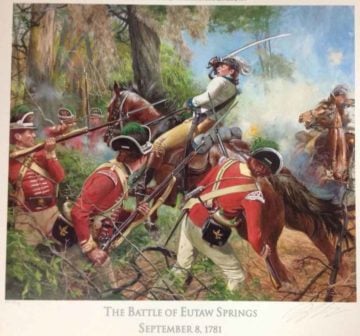 On September 8, at 4:00 AM, Greene's army began marching from Burdell's Plantation in the direction of Eutaw Springs, which was 7 miles distant. In the van were Lieutenant Colonel Henry Lee's Legion plus 73 infantry and 72 cavalry of South Carolina State troops under Lieutenant Colonel John Henderson and Captain Wade Hampton, respectively.

All told, Greene had 1,256 Continental infantry and 300 cavalry, the horsemen mostly divided between Lee and Washington. Lee's cavalry were led by Major Joseph Egleston and his infantry by Captain Rudolph. Greene's army numbered 2,400 men of whom 200 were left behind to guard the baggage train.

Stewart had between 1,800 and 2,000 troops on hand. His British regulars were the 3rd Foot, 63rd Foot, 64th Foot, and John Marjoribanks' 300-man flank battalion. The last-named unit was made up of the converged flank companies of the 3rd, 19th, and 30th Foot. The regulars were supported by two American loyalist contingents. These units were John Harris Cruger's regular battalion of DeLancey's Brigade and John Coffin's South Carolina Tories, which consisted of about 150 regular infantry and 50 militia cavalry. Stewart's artillery consisted of two 6-pound, one 4-pound, and one 3-pound cannons plus a swivel gun.

On September 8, in order to make up for a shortage of bread in his supplies, Stewart had been sending out foraging parties each morning to dig up yams, unarmed except for a small guard detail. At around 8:00 AM, Captain John Coffin and a detachment of his South Carolina Loyalist cavalry were reconnoitering ahead of Stewart’s main force when he encountered a mounted American scouting party under Major John Armstrong.

Coffin pursued Armstrong, who led him into an ambush. Attacked by Henry Lee’s 2nd Partisan Corps, Coffin escaped but left 4 or 5 of his men killed and 40 more captured. The Americans then came across Stewart’s foragers and captured about 400 of them.

The early day dawned fair and intensely hot, but the Americans, on short rations and with little rest, advanced in early morning light toward the springs. At their approach, the surprised British left their uneaten breakfast and quickly threw lines of battle across the road in a heavily wooded area. Behind them in cleared fields stood a large brick home with a high-walled garden. The woods and waters of Eutaw Creek were on the north. Heavy firing soon crackled and boomed through the shady woods. 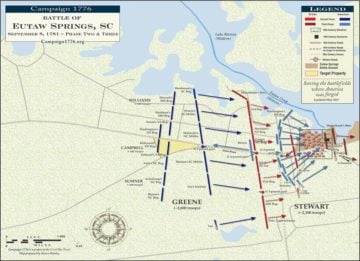 At first the center of the American line caved in, but while opposing flanks were fighting separate battles, Greene restored the center with Sumner's North Carolina Continentals. The whole British line then began to give, but Stewart quickly pulled up his left-flank reserves, forcing the Americans to retreat under thunderous fire. The encouraged British shouted, yelled, and rushed forward in disorder; whereupon Greene "brought in his strongest force: the Maryland and Virginia Continentals, Kirkwood's Delaware's, and Wm. Washington's South Carolina cavalry . . . with devastating effect."

The British fled in every direction and the Americans took over their camp. Only Major Majoribanks, on the British right flank and pushed far back into the woods near Eutaw Creek, was able to hold his unit together. Major Sheridan took hasty refuge in the brick home, Colonel Stewart gathered some of his men beyond, and from this vantage they "picked off" many American officers and men.

Greene sent Colonel William Washington's cavalry to deal with Majoribanks, but penetrating the woods with horses was too difficult, so Washington tried to encircle and rout, thus exposing himself to dangerous fire. His horse was shot from under him, he himself was wounded. and his company practically ravaged. When a hand to hand fight developed, a British soldier poised his sword over the wounded Washington, but Majoribanks saw and gallantly turned it aside.

In camp, eating the deserted breakfast, and feeling the battle was won, the hungry, thirsty Americans began plundering the English stores of food, liquors, and equipment. Thoroughly enjoying themselves they ignored their leaders' warnings and commands. Majoribanks, realizing the disorder, fell upon them. Sheridan and Stewart pounded at their right, and Coffin came in from their left. The stunned Americans fought this impossible situation bravely, but they were put to flight from the British camp.

After more than 4 hours of battle, both armies had had enough. Casualties were extremely high. "Blood ran ankle-deep in places," and the strewn area of dead and dying was heart-breaking. Greene collected his wounded and returned to Burdell's Plantation. Stewart remained the night at Eutaw Springs. 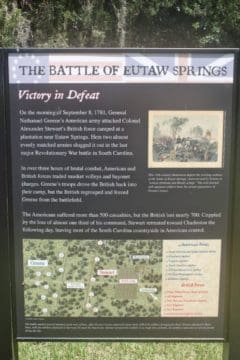 On September 9, rain prevented a continuation of battle. Instead, Stewart buried his dead, destroyed supplies, including 1,000 muskets, and retreated from Eutaw Springs toward Charleston, leaving behind many of his dead unburied and seventy of his seriously wounded. The gallant Majoribanks, wounded and on his way to Moncks Corner, died in a Negro cabin on Wantoot Plantation. He was buried beside the road.

Green pursued Stewart as far as Martin's Tavern near Ferguson's Swamp. At this point, on September 11, Stewart was within range of support from the British garrison in Charleston.

Stewart's letter to Cornwallis on September 11 states, "With particular satisfaction I have the honour to inform your lordship, that on the 8th instant I was attacked by the rebel General Greene, with all the force he could collect in this province and North Carolina, and after an obstinate engagement, which lasted near two hours, I totally defeated him, and took two six pounders."

Greene's letter to Washington on September 17 states, "Be far the most obstinate fight I ever saw. Victory was ours, and had it not been for one of those little incidents which frequently happen in the progress of war, we should have taken the whole British Army."

Many of the men who were killed were buried where they fell. This last major battle in South Carolina completely broke the British hold in the South and, more importantly, it denied needed aid to the British forces in the North.

Neither army left the vicinity for at least a full day following the battle. When Greene withdrew, he left a strong picket to oppose a possible British advance, while Stewart withdrew the remnants of his force towards Charleston. His rear was apparently under constant fire at least until meeting with reinforcements near Moncks Corner.

Despite winning a tactical victory, the British lost strategically. Their inability to stop Greene's continuing operations forced them to abandon most of their conquests in the South, leaving them in control of a small number of isolated enclaves at Wilmington, Charleston, and Savannah. The British attempt to pacify the South with Loyalist support had failed even before Cornwallis surrendered at the Battle of Yorktown.