The Battle of Clapp's Mills

Facts about the Battle of Clapp's Mills 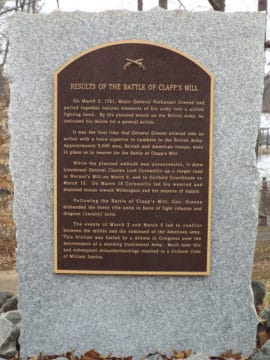 Lee's Legion cavalry, led by Captain John Rudulph, a battalion of Preston's riflemen, under Major Thomas Rowland, 200 Lincoln County militia under Major Joseph Dickson, a detachment of 40 of Pickens’ cavalry under Captains Joseph Graham and Richard Simmons, some Catawba Indians, with Kirkwood and Oldham’s Continental light infantry acting as a reserve -- all formally under Otho Williams’ and Pickens’ command -- skirmished with a covering party of Lieutenant Colonel Banastre Tarleton's at Clapp’s Mill, near Alamance Creek (a southern branch of the Haw River).

The force under Tarleton was made up of the British Legion cavalry, under Capt. Richard Hovenden, the light infantry of the Guards, under Captain Francis Dundass, a few mounted infantry, and 150 men of the 33rd Regiment. Pickens force was finally driven back, but only after inflicting relatively substantial losses on Tarleton’s men.

On March 5, Greene, at Boyd’s Mill, wrote to von Steuben: "on the 2nd, Lieut. Col. Lee, with his Legion, and a few Militia and some Catawba Indians had a skirmish with the Enemy near Alamance. The Enemy had 7 killed and upwards of 40 wounded." Tarleton said he "dislodged and dispersed a corps of eight hundred men" with the British suffering 21 killed or wounded in the skirmish.

Joseph Graham, who wrote a very interesting account of the action, referred to the engagement as "Clapp's Mill" and said American casualties were 8 dead and an unknown number wounded. Captain Nathaniel Pendleton, on behalf of Greene, wrote to Brigadier General Butler on March 3, stating that a deserter gave the British losses at Alamance at 25 killed and wounded. The American losses were 10 or twelve killed and wounded. Lee in his memoirs makes a brief footnote reference to the skirmish, apparently not thinking its significance did extended beyond this. 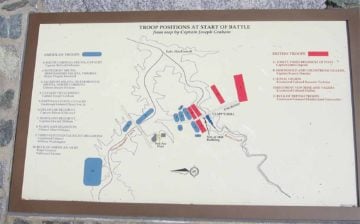 In just 4 days, the two same forces would meet again at the Battle of Wetzell's Mills, with the British gaining an important victory.

Tarleton: “As soon as General Greene was informed of the position of the main body of the King's troops near Allamance[Alamance], and that their advanced guard extended a little way towards Deep river, he crossed the Haw near its source, and took post between Troublesome creek and Reedy fork. The two armies did not long remain in this situation. The British cavalry were ordered on the 2d of March to forage about three miles in front of their encampment.

Captain [Richard] Hovenden, of the legion, who commanded the covering party, observing some of the American dragoons in the neighbourhood of the plantations where he was directed to collect forage, rode forwards to examine more closely; when, perceiving the enemy's infantry, he dispatched the foragers to camp without their burdens, and, on his return, reported the circumstances he had discovered. This intelligence induced Lieutenant-colonel Tarleton to make a patrole with his whole corps, which consisted of the cavalry, a few mounted infantry, the light company of the guards, and one hundred and fifty men of Colonel Webster's brigade, after having conveyed to Earl Cornwallis, by express, his reason for such a proceeding.

The approach to the ground where the enemy were described to have been seen proving unfit for the operations of cavalry, Tarleton directed the infantry to form the advance, and to explore the thick woods upon the flanks with great attention. The light company of the guards, commanded by Captain Dundass [Francis Dundas], led the column, the infantry of the line followed the guards, and the cavalry brought up the foragers in the rear, till the country would allow the dragoons to move on to the front.

When the British drew near to the plantations which were to furnish the forage, a heavy fire from some thickets on each side of the road discovered the situation of the enemy. The guards formed with their usual alacrity, and Captain Ingram, of the 33d regiment, who commanded the hundred and fifty men of Webster's brigade, was directed to dress his left by their right, whilst the cavalry moved to his right, where the country appeared most favourable for their exertions.

The gallantry of the British troops, after a short conflict, dislodged and dispersed a corps of eight hundred men, composed of Lee's legion, Washington's dragoons, and Preston's backwoodsmen. The loss of the Americans was confined principally to the woodsmen; the continentals retreated early, and did not wait the charge of the British dragoons, who were much impeded in their advance by a thick wood and high rails, which prevented the action from being more general and decisive.

The pursuit was restrained on account of the various roads by which the enemy's cavalry could escape, and in consequence of the report of prisoners, who acknowledged that General Greene was moving with the American army to the southward of the Reedy fork. Though the continentals suffered little in this affair, numbers of the riflemen were killed and wounded; and being abandoned by their cavalry, the rest were totally dispersed. The loss of the British amounted to one officer wounded, and twenty men killed and wounded, which fell principally upon the guards.

During the time that the dragoons were collecting their trusses, an express was sent to Earl Cornwallis to advise him of the movement of the enemy; and the forage being completed, the light troops fell back to their former encampment; where they found Major De Buy, with the yagers, the regiment of Bose, and two pieces of cannon, Earl Cornwallis having advanced this support as soon as he heard the musketry in front.” 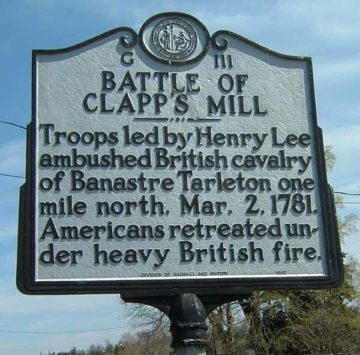 Otho Williams at “Allimance,” on the 2nd wrote to Greene: "[About noon] Lee advanc'd one Mile from our Camp where his Flank was Fired upon. The mounted Rifle men had not time to dismount and did not return the fire so brisk as I expected.

However those on Foot and the Infantry of the Legion were making a handsome defence when I order'd a gradual retreat which was well enough effected considering the irregularity of our order. I believe very few fell on either side. We have 10 or 12 wounded."

Joseph Graham: “Cols. Williams and Lee used great exertions to form the militia, but as they got some to fall in, and exerted themselves to rally others, these would move off again. Major [Joseph] Dickson, of Lincoln, who with his characteristic coolness and decision, saw the difficulty, observed to Williams, ‘You may depend upon it, you will never get these men to form here while the enemy are firing yonder.

If you will direct them to form on the next rise beyond that hollow, one hundred yards back, they will do it.’ Col. Williams instantly adopted this plan. Our line was restored. The regulars [Kirkwood’s and Oldham’s troops] retired to their place in it, and the firing ceased, tho’ the enemy was still in view.

In about twenty minutes we marched off in order, and they did not follow. In a mile or two we came to the ford on Alamance, where the whole light troops, Washington’s cavalry, and all the militia belonging to the army except what were with Greene, were drawn up in position. The eminences and passes were lined with the latter. This arrangement Col. Williams their commander had made, before he came on, to the battle. After remaining half an hour the whole marched back five or six miles when the different corps separated. Pickens and Lee camped together.”