After Buford's defeat by Lieutenant Colonel Banastre Tarleton on May 29, 1780 at the Waxhaws, many Patriots in the neighboring countryside were anxious to strike a blow in revenge. On the western side of the Catawba River, Captain John McClure collected a party of 32 volunteers and on May 31, attacked a group of Loyalists gathering to take British protection at Alexander's Old Field, in present Chester County.

Although the Loyalists, led by a Colonel Houseman, numbered about 200, they were defeated and dispersed by the small Patriot force. This was the first Patriot victory after the fall of Charlestown, and the beginning of a great wave of backcountry resistance to the British and their Loyalist allies.

Facts about the Battle of Beckhamville 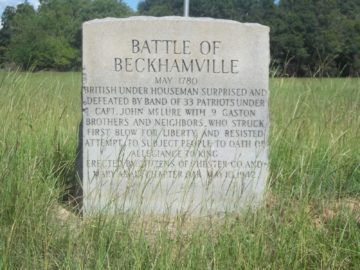 Before General Henry Clinton left for New York he appointed Major Patrick Ferguson to be the Inspector of Militia, under Lieutenant General Charles Cornwallis. Ferguson immediately went about his assigned task, and a call went out to the people in the Rocky Mount area to assemble at Beckham's Old Field to take the oath of allegiance to the king.

One of the Loyalist officers attempting to gather support for the British was Colonel Houseman. Houseman was a commander of a British post near Rocky Mount. He rode to a large Patriot family, headed by Justice John Gaston. Later, John Gaston, Jr. wrote that Houseman was "in a dress altogether plain, accompanied by about fifty of those plundering banditti, which the British policy had dignified with the name of loyalists."

Houseman begged, then threatened, the Gaston family to join the Loyalists. Gaston told him "never." After Houseman rode on, Gaston sent out his seven sons to gather their neighbors to disperse the assembly of Loyalists.

Gaston's nephew, Captain John McClure, had been at Moncks Corner when he learned of the surrender of Charlestown. He returned home with his company of men and then learned of Buford's Defeat at the Waxhaws. He and his men vowed to keep fighting, no matter what the odds.

John Gaston, Jr. wrote, "On the reception of this news, he [Capt. McClure], three of Gaston's sons, and Capt. John Steel, I think arose upon their feet and made this united and solemn declaration, 'that they would never submit nor surrender to the enemies of their country; that liberty or death, from that time forth, should be their motto.'"

McClure and his men "were clad in hunting shirts and moccasins, wool hats and deer-skin caps, each armed with a butcher knife and a rifle." With him was Rev. John Simpson, who the next day became a captain alongside McClure under the recently-formed Turkey Creek Regiment created by Colonel Edward Lacey. Also with McClure and Simpson were Lt. Hugh McClure (his brother), and Lt. John Steele. Gaston, Jr. wrote, "They were principally of the Knoxes, Walkers, Morrows, McClures, and Johnsons."

There are differing accounts on casualties as a result of the engagement. Some claim that there were no casualties on either side - wounded or killed. Another claims that four Loyalists were killed and two of McClure's men were wounded. Samuel Morrow later told that Hugh McClure was wounded in this action. Daniel Stinson wrote that McClure was badly wounded in the right arm and that Joseph Morrow was wounded in the arm. They took nine Loyalist prisoners.

Gaston, Jr. wrote that McClure and William McGarrity were wounded. He also wrote that "it is most possible that McClure's men did not wish to kill, knowing that many good men might be there who knew of no relief, but to submit and take parole. Only one was killed, and he was known to be a real friend to his country." 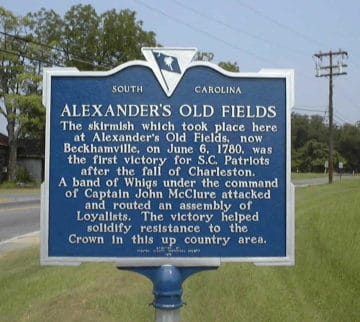 Joseph Gaston wrote that he lost two brothers in the fighting. He was also badly wounded when he spotted "one of the enemy, both raised their pieces at once and both fired the same instant and both fell, his antagonist shot through the heart." Gaston was hit by the ball "striking the bridge of his nose and passing under the left eye, shattering the cheek bone and going out of the ear, partially imparing his sight and hearing."

Houseman was "filled with rage," and sent some men to capture the 80-year-old John Gaston. "They found his dwelling deserted. His wife, concealed in some bushes nearby, saw them plunder the house of every item and carry off the stock from the plantation. Nothing was left but the family Bible."

The next day, Capt. John McClure and his men rode on to find Colonel Thomas Sumter and to join his growing Patrior militia force.