The Battle of King's Mountain 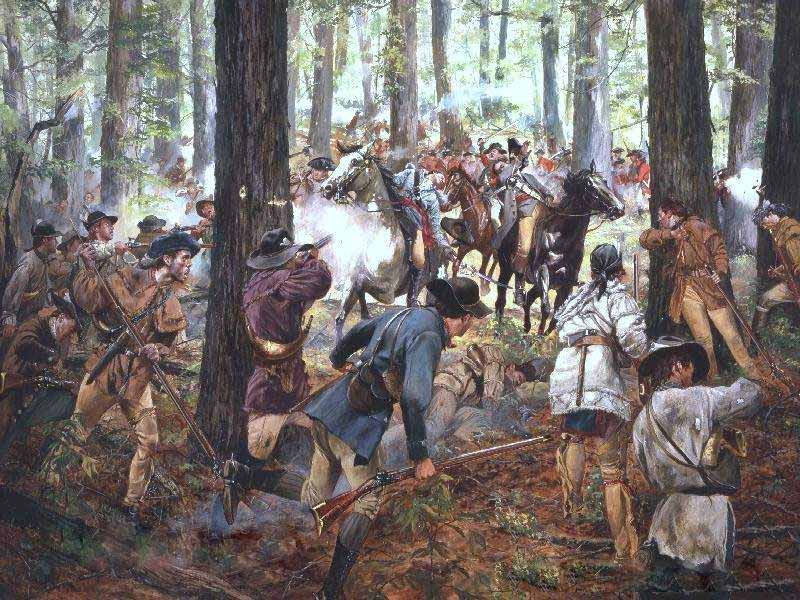 The Battle of Kings Mountain was a military engagement between Patriot and Loyalist militias in South Carolina during the Southern Campaign, resulting in a decisive victory for the Patriots. The battle took place 9 miles south of the present-day town of Kings Mountain, North Carolina, in what is now rural Cherokee County, South Carolina.

The Patriot militia defeated the Loyalist militia commanded by Major Patrick Ferguson of the 71st Foot. Ignoring the participation of Ferguson, the battle has been described as "the war’s largest all-American fight".

Ferguson had arrived in North Carolina in early September 1780 to recruit troops for the Loyalist militia and protect the flank of Lieutenant General Charles Cornwallis' main force. Ferguson issued a challenge to the American militias to lay down their arms or suffer the consequences. In response, the Patriot militias led by Benjamin Cleveland, James Johnston, William Campbell, John Sevier, Joseph McDowell and Isaac Shelby rallied for an attack on Ferguson.

Receiving intelligence on the oncoming attack, Ferguson decided to retreat to the safety of Cornwallis' army. However, the Patriots caught up with the Loyalists at Kings Mountain near the border with South Carolina. Achieving a complete surprise, the Patriot militiamen attacked and surrounded the Loyalists, inflicting heavy casualties.

After an hour of battle, Ferguson was fatally shot while trying to break the American line, after which his men surrendered. Some Patriots gave no quarter until the rebel officers re-established control over their men; they were said to be seeking revenge for alleged killings by Lieutenant Colonel Banastre Tarleton's militiamen at the Battle of Waxhaws, under the slogan "Remember Tarleton's Quarter."

Although victorious, the Patriots had to retreat quickly from the area for fear of Cornwallis' advance. Later they executed nine Loyalist prisoners after a short trial.

The battle was a pivotal moment in the Southern campaign. The surprising victory of the American patriot militia over the Loyalists came after a string of American defeats at the hands of Cornwallis, and greatly raised the Patriots' morale. With Ferguson dead and his Loyalist militia destroyed, Cornwallis was forced to abandon his plan to invade North Carolina and retreated into South Carolina.

Facts about the Battle of King's Mountain

The Battle of Kings Mountain

While Ferguson was en route to join Cornwallis, he learned that a large group of Patriots were following him. He turned the head of his command southward, making a deliberate hook maneuver onto a ridge line 36 miles west of Charlotte.

Ferguson placed his force in defensive positions along the ridge's plateau, 600 yards long. Sentries were placed below the rim of the hilltop to provide early warning of any Patriot attack. Ferguson's command was made up of 1,075 troops derived from elements of 6 Loyalist Militia regiments.

They were organized into four main units. With everyone in place, Ferguson waited for the Patriots to come and attack him. Ferguson parked his 17 wagons in a semi-circle on the northeast corner of the plateau. This is also where he established his headquarters and encampment.

The combined militias of Colonels Issac Shelby, John Sevier, Joseph McDowell, and William Campbell came together in late September. They learned that Ferguson's Loyalist force was invading the Carolinas and threatening to hang them and burn their homes. Outraged by this, the Patriot force set out to destroy the Loyalists. Soon, the Patriot militia was joined by other troops from both Carolinas and Georgia. Campbell was given command of the overall force.

On October 6, while camped at Cowpens, the Patriot force was joined by Colonel James Williams and 400 South Carolinians. The locals informed Campbell that Ferguson was 30 miles to the north at King's Mountain. The Patriots wanted to catch up with him before he reached Charlotte and Cornwallis' protection. Campbell took 910 of the best men and took off for Ferguson. 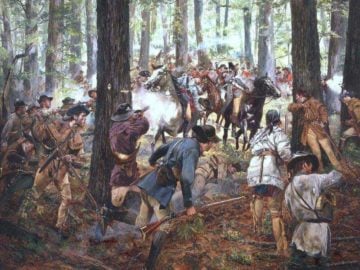 Fighting at the Battle of Kings Mountain

On October 7, around 12:00 P.M., Campbell's militia approached the broad northern slope of the ridge, where the thick woods shielded their approach. Campbell divided his force into two divisions of nearly equal strength. The divisions were further divided into four linear columns to better maintain unit integrity during their approach to the high ground and to more rapidly reach their respective assault positions.

The 440-man Left Division was ordered to surround the north side of the mountain while the 470-man Right Division was ordered to surround the south side. Once both divisions were in position to begin, a signal would be given to start the assault. The signal was to be a loud Indian war-whoop. Once the assault began, everyone was to press upward at the same time and overwhelm the Loyalists on the high ground.

At 2:00 P.M., Campbell gave the order to advance. Major Joseph Winston led his men out first. His mission was to swing his men beyond the southwestern point of the ridge, cutting an arc about one mile beyond the mountain. He would then circle back and approach the objective from the northeast. Winston's mission was important because the only road that led to the heights ran up the eastern side of Kings Mountain. If Ferguson tried to retreat toward Charlotte, Winston's cavalry would block Ferguson's move.

Parts of the Left Division became bogged down in marshy terrain several hundred yards from their objective. Shelby's column was the only group that was able to move freely. As Shelby approached his assault position, Campbell's column to the southwest was riding around the southwestern end of the mountain and closing in on their assigned position. Just behind Campbell was Sevier and McDowell, who were ordered to continue around the southern flank of the high ground to extend their lines northeast. 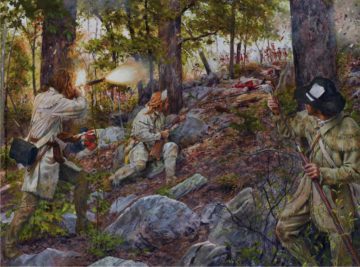 These two groups opened fire on each other. Ferguson sounded an alert and ordered his Provincial Rangers to rapidly move to the southwest corner of the ridge to counter what he thought to be the most serious threat.

While moving around the southwest base, Campbell's column was detected by a Loyalist who fired on them. Campbell decided to turn around and assault the heights.

Winston's force reached its assigned position, thus blocking the road off Kings Mountain and attcking the Loyalists from there. Sevier's and McDowell's columns became intermingled with Campbell's column, but still made the assault. For the first 20 minutes, the Right Division carried out the assault because the Left Division columns had not yet reached their assigned starting positions.

Near the southwestern tip of the summit, Campbell, Sevier, and Shelby pressed into the Loyalist line. A hand-to-hand fight ensued. During the same time, the arrival of a Patriot column at the heights to the northeast caused Ferguson to leave some militia to defend the southwestern end of the ridge while he took his Rangers down the ridge to face the newly arriving Patriot column. 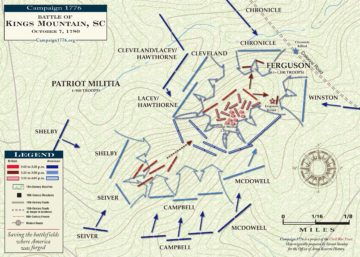 At 3:30 P.M., Ferguson was starting to confront the Left Division. Winston and Major Chronicle formed their men and assaulted from the northeast while another group attacked along the northern slope. Ferguson had his militia line the the brow of the northern ridge while waiting for the Patriots. The Patriot advance ended up with the men in small pockets, maneuvering up the slope while firing at the Loyalists.

On the summit, the Rangers launched yet another bayonet charge against the arriving Patriots on the northeast slope. The Rangers withdrew a few minutes later. Overall, the multiple bayonet charges only delayed the Patriots instead of stopping them as Ferguson had hoped.

Heavy pressure against the northeast summit forced Ferguson to shift troops to that sector. In the southwest corner, dozens of Patriots from the Right Division finally reached the summit and began pushing Loyalists from their strongholds along the crest. Parts of the Left Division began mounting the crest in the northern and northeastern sectors about the same time. The tide of the battle began turning decisively in favor of the Patriots.

Constrained within his own formations, tents, and wagons, Ferguson had little room left to maneuver. His only option was to stand and die, or assault and try to turn the tide. He ordered his Rangers to assault the Patriots charging up the ridge from the southwest. He also ordered some mounted Loyalists to charge into the approaching Patriots. Before the Loyalists could really do any damage, the Patriots picked them off too quickly.

Pressing forward, the swarming patriots gained the upper hand quickly, picking off the Tories who were wandering around on the plateau. The Rangers were finished off as an effective fighting unit. This signaled the end of Ferguson's demoralized command. They were now completely surrounded and running out of ammunition.

Ferguson finally attempted to cut a path through the Patriot line so that his army could escape, but this failed as Ferguson fell from his horse, riddled with bullets. Ferguson's second-in-command quickly raised the white flag of surrender. Following the request of surrender, it took a while for the firing to stop, with cries of "Remember Waxhaws" and "Buford's Quarter" spurring some men to continue fighting for a time. 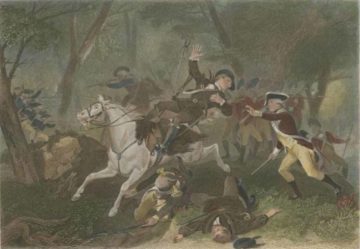 The Battle of Kings Mountain lasted 65 minutes. The Patriots had to move out quickly for fear that Cornwallis would advance to meet them. Loyalist prisoners well enough to walk were herded to camps several miles from the battlefield. The dead were buried in shallow graves and wounded were left on the field to die.

Ferguson's corpse was later reported to have been desecrated and wrapped in oxhide before burial. Both victors and captives came near to starvation on the march due to a lack of supplies in the hastily organized Patriot army.

On October 14, the retreating Patriot force held drumhead courts-martial of Loyalists on various charges (treason, desertion from Patriot militias, incitement of Indian rebellion).Passing through the Sunshine community in what is now Rutherford County, N.C., the retreat halted on the property of the Biggerstaff family.

While stopped on the Biggerstaff land, the rebels convicted 36 Loyalist prisoners. Some were testified against by Patriots who had previously fought alongside them and later changed sides. Nine of the prisoners were hanged before Isaac Shelby brought an end to the proceedings. His decision to halt the executions came after an impassioned plea for mercy from one of the Biggerstaff women.

Many of the Patriots dispersed over the next few days, while all but 130 of the Loyalist prisoners escaped while being led in single file through woodlands. The column finally made camp at Salem, North Carolina.

Kings Mountain was a pivotal moment in the history of the American Revolution. Coming after a series of disasters and humiliations in the Carolinas—the fall of Charleston and capture of the American army there, the destruction of another American army at the Battle of Camden, the Waxhaws Massacre—the surprising, decisive victory at Kings Mountain was a great boost to Patriot morale. The Tories of the Carolina back country were broken as a military force.

Additionally, the destruction of Ferguson's command and the looming threat of Patriot militia in the mountains caused Lord Cornwallis to cancel his plans to invade North Carolina; he instead evacuated Charlotte and retreated to South Carolina. He would not return to North Carolina until early 1781, when he was chasing Major General Nathanael Greene after the Americans had dealt British forces another defeat at the Battle of Cowpens.

After the battle, Joseph Greer of the Watauga Association at Sycamore Shoals (located at what is today the city of Elizabethton, Tennessee) set off on a 600 mile, month-long expedition to notify the Continental Congress of the British defeat at the battle. He arrived in Philadelphia on November 7. Greer's report of the American Patriot victory at Kings Mountain "re-energized a downtrodden Continental Congress."