The Battle of Fish Dam Ford

The Battle of Fishdam Ford was an attempted surprise attack by British forces against an encampment of Patriot militia  around 1:00 AM on the morning. Major James Wemyss was wounded and captured in the attack, which failed because of heightened security in Sumter's camp and because Wemyss did not wait until dawn to begin the attack.

Facts about the Battle of Fish Dam Ford

Pursuant to the British "southern strategy" for winning the Revolutionary War, British forces had captured Charleston, South Carolina early in 1780, and had driven Continental Army forces from South Carolina. Following his successful routing of a second Continental Army at Camden in August 1780, Lieutenant General Charles Cornwallis paused with his army in the Waxhaws region of northern South Carolina.

Believing British and Loyalist forces to be in control of Georgia and South Carolina, he decided to turn north and address the threat posed by the Continental Army remnants in North Carolina. In mid-September, he moved north to Charlotte, North Carolina, where he was virtually surrounded by active North Carolina militia and Continental Army units. Following the important defeat of gathering Loyalists at Kings Mountain, Cornwallis retreated back to Winnsboro, South Carolina, where he engaged in attempts to suppress the Patriot militia that were harassing his supply and communication lines.

Two troublesome militia commanders in South Carolina were Colonel Thomas Sumter and Brigadier General Francis Marion. Marion caused trouble for Cornwallis in the northeastern part of the state, east of the Santee River. His activities were successful enough that Cornwallis sent Lieutenant Colonel Banastre Tarleton in November to hunt the wily Marion down. Sumter made similar troubles in the backcountry, where Cornwallis sent Wemyss with the 63rd Regiment and some Loyalist dragoons to find him.

On November 8, Wemyss learned from local Loyalists that Sumter was encamped near Fishdam Ford. His intelligence about Sumter's camp was sufficiently detailed that some men were specifically designated to attack Sumter's tent.

On November 9, while moving quickly, Wemyss arrived near Sumter's camp early that morning. Fearing they would be discovered by Sumter's patrols, Wemyss opted to attack immediately rather than waiting for dawn. 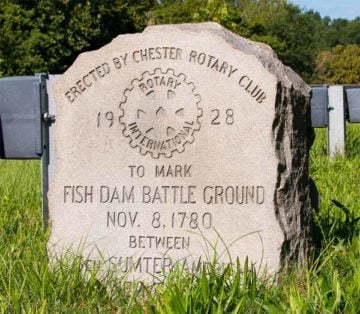 Wemyss of the 63rd, whose corps had recently joined the army at Winnsborough from Camden, was dispatched on the 8th by Cornwallis to disperse Sumter’s militia, who were congregating for the purpose of collecting volunteers at Fish Dam Ford. Wemyss’ men were mounted on horses they had brought along with them to Winnsborough. With 100 to 200 of the 63rd Regiment and 40 dragoons of the British Legion. Wemyss led the advance guard, followed by Lieutenant Moore Hovenden with the main body of dragoons, and Lieutenant John Stark with the mounted infantry of the 63rd.

Colonel William Hill, as given in Bass, described the dispositions of Sumter’s troops as follows: “The General [Sumter] takes post immediately at the ford [east side of the Broad River]…Colonel Winn to his left, directly on the bank of the river; Colonel Taylor on a square to the left of Colonel Winn; and Lacey[who was furthest east], Bratton and Hill in front about three or four hundred yards.”

Wemyss approached the camp by night. About 1:00 AM, he charged the picket, and in routing them woke the American camp. Some of Wemyss dragoons nearly missed catching Sumter. Sumter, in a letter to Smallwood of the 10th, said Wemyss’ force was made up of a party of dragoons and mounted infantry, about 200 in number with a large party of loyalists, and that the attack came at 3:00 AM.

The lone miltia picket fired 5 shots off before he withdrew. Wemyss was wounded in this encounter, falling off his horse. He had a broken arm and a wounded knee. He passed command to Stark. Stark took the cavalry and led a mounted charge down the road into the American camp.

The mounted infantry were ordered to dismount and attack on foot. The British cavalry were silhouetted against the campfires, making them an easy target. Sumter's men took advantage of this and shot up the British. The infantry finally made it into the camp and engaged Sumter's men.

A party of 5 British dragoons were given the important mission of capturing Sumter alive and take him prisoner. A local Tory named Sealy led these men to Sumter's tent. Sumter saw them coming and slipped out of the back of his tent at the same time that 2 of the dragoons entered the front. They had just missed capturing him.

Sumter escaped to the Broad River and hid under the riverbank that night. After a short time of some heavy fighting the British were beaten back, Wemyss being wounded, taken prisoner and subsequently paroled. Stark offered a flag of truce for the British wounded, leaving them with the Americans, and took the rest of his force back to Winnsboro. When Sumter returned back to his camp around noon, he took the paroles of the British wounded.

The command of the British force devolved on Stark, who was not capable of leading troops the later in the morning due to lack of knowledge or understanding of the original plan, and consequently they retreated. Even so, Wemyss had succeeded in dispersing most of Sumter’s force.

Only about 100 of Sumter's men returned next day, "hoping at least to recover their horses, and joined by those who were collecting under the orders of the General, took a more secure position by crossing Broad-river.” (Davie) Edward Lacey’s biographer, M.A. Moore, says that many of Sumter’s men had been intoxicated at the time of the fighting. Tarleton gives British losses as near 20 killed and wounded. Sumter reported 25 prisoners, including Wemyss wounded, one surgeon, and a Sgt. Major and 7 were killed.

As well, a “parcel” of horses were captured. He gave his own casualties as 4 killed and 10 wounded. The action was interpreted as an American success by both sides. Within a few days Sumter’s force rose to upwards of 1,000. Wemyss' wounds kept him from further participating actively in the south, and he returned to Charleston.

On November 9, Cornwallis, in Winnsborough, wrote to Tarleton: “Major Wemyss attacked Sumpter at Fish Dam at one o'clock this morning, contrary to his plan, which was to wait until day light; the consequence is, that Wemyss is wounded and left, and about twenty men: Lieutenant [Moore] Hovenden is wounded, but I believe the legion has not lost much -- Must beg of you to return immediately, leaving some horses for mounting men at Camden. I am under the greatest anxiety for Ninety-Six, and trust you will lose no time in returning to me.”

On November 10, Cornwallis wrote Tarleton again: “You will have received my letter of yesterday, since which we have intelligence that Sumpter has passed the Broad River, and joined Clark, Brannen [Brandon], &c. They talk of expecting some of the mountaineers; as they have excellent horses we cannot hurt them; and unless they receive some check they will be very troublesome. The 63d are well mounted for infantry, and may occasionally ride in your train, they behaved vastly well, out of five shots which were fired from the picket, one broke Wemyss' arm, and another his knee, the command then devolved to a young lieutenant, who knew nothing of the plan, or the ground, or the force of the enemy, and all was confusion. After what I have said, I am sure I may depend on your acting for the best, on the general plan of the welfare of the army.”

Sumter wrote to Smallwood on November 10: “They [Wemyss’ men] first charged on horseback and were repulsed. The infantry immediately dismounted, formed and charged with the bayonet. The cavalry at the same time charged on the right of Major Wemyss division. The horse was again beat back in disorder. The infantry succeeded better, and made the division under Col. Taylor give way, but not until the whole division had fired, and several of the men been bayoneted upon the spot, and for want of the means defending themselves, gave way. At the same instant, so war a fire was poured down the enemy from Colonel Lacey’s and Hawthorn’s divisions, that they broke and moved off some distance, where they mounted and sent off some of their wounded, who were soon after followed by the whole.”

Davie: "the 12th (sic) of November was the 1st effort made by Sumpter and the officers in the neighborhood of the new acquisition to assemble the militia in that part of the Country -- so large a number of the leading characters had fallen at the time Sumpter was surprised, and the people were so dreadfully terrified by their past misfortunes, that it was extremely difficult to collect the remaining Whigs, However at this time Smallwood with a body of NC militia and Genl Morgan's detachment lay at Providence, and Col Davie with 300 mounted infantry occupied an advanced post near Lands Ford on the Catawba river in So Carolina, the defeat of Ferguson the retreat of Cornwallis and the advance of these troops began again to inspire the Country with some degree of confidence, and on the 11th of November the remnant of the Whigs in the upper part of So Carolina had notice to rendezvous at Fish-dam Ford on Broad-river from Sumpter…The orders for assembly were so public, that the Enemy had immediate notice of it."