The Battle of Vincennes 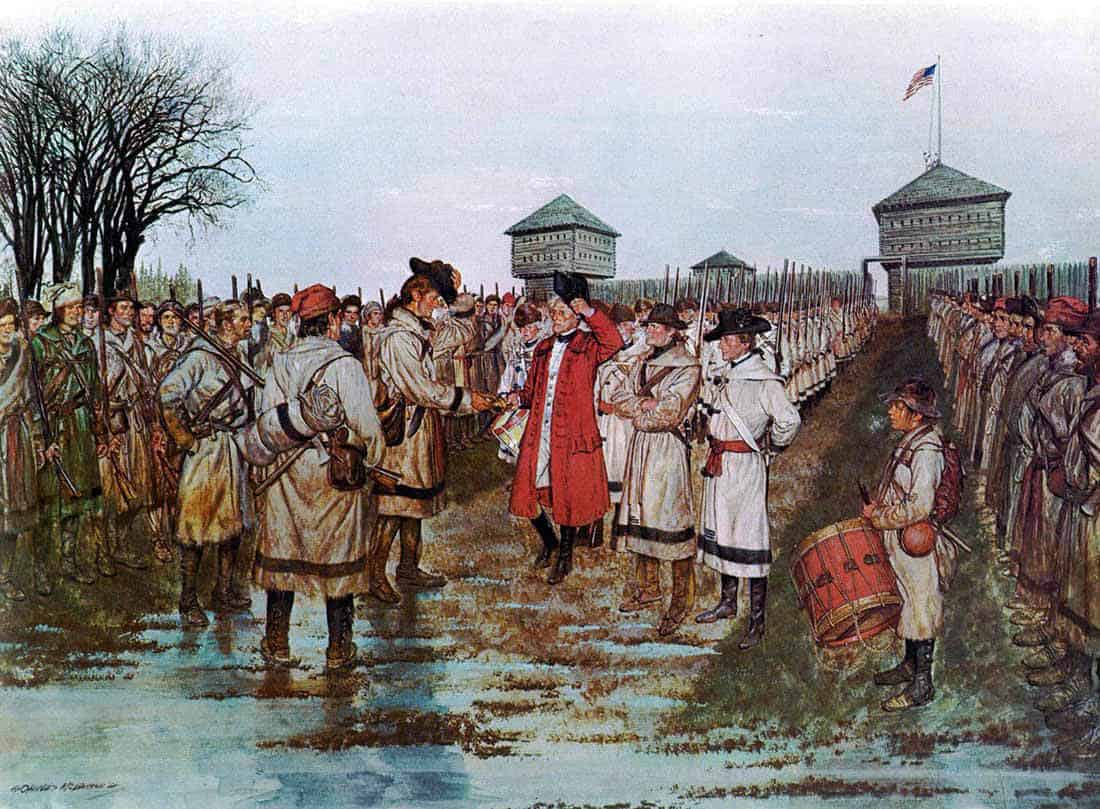 The Siege of Fort Vincennes (aks the Siege of Fort Sackville or the Battle of Vincennes) was a frontier battle fought in present-day Vincennes, Indiana. It was won by an American militia over a British garrison. Roughly half of George Rogers Clark's militia were Canadien volunteers sympathetic to the American cause.

After a daring wintertime march, the small American force was able to force the British to surrender the fort and in a larger frame the Illinois territory.

Facts about the Battle of Vincennes 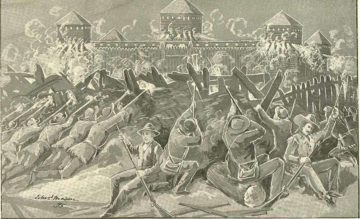 On January 29, Francis Vigo, an Italian fur trader, came to Kaskaskia to inform Clark about Hamilton's reoccupation of Vincennes. Clark decided that he needed to launch a surprise winter attack on Vincennes before Hamilton could recapture the Illinois country in the spring.

He wrote to Lieutenant Governor Henry Hamilton: "I know the case is desperate; but, sir, we must either quit the country or attack Mr. Hamilton. No time is to be lost. Were I sure of a reinforcement, I should not attempt it. Who knows what fortune will do for us? Great things have been effected by a few men well conducted. Perhaps we may be fortunate. We have this consolation, that our cause is just, and that our country will be grateful and not condemn our conduct in case we fall through. If we fail, the Illinois as well as Kentucky, I believe, is lost."

On February 6, Clark set out for Vincennes with 127 volunteers, nearly half of them French militia from Kaskaskia. Captain Bowman was second-in-command on the expedition, which Clark characterized as a "forlorn hope." While Clark and his men marched across country, 40 men left in an armed row-galley, which was to be stationed on the Wabash River below Vincennes to prevent the British from escaping by water.

Clark led his men across what is now the state of Illinois, a journey of about 180 miles. It was not a cold winter, but it rained frequently, and the plains were often covered with several inches of water. Provisions were carried on packhorses, supplemented by wild game the men shot as they traveled.

On February 13, they reached the Little Wabash River and found it flooded, making a stream about 5 miles  wide. They built a large canoe to shuttle men and supplies across. The next few days were especially trying: provisions were running low, and the men were almost continually wading through water. 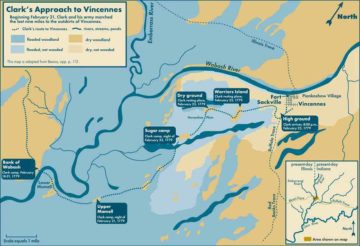 Clarks-approach at the Battle of Vincennes

On February 17, they reached the Embarras River. They were now only 9 miles  from Fort Sackville, but the river was too high to ford. They followed the Embarras down to the Wabash River, where the next day they began to build boats. They had been without food for last two days, and Clark struggled to keep men from deserting.

On February 20, five hunters from Vincennes were captured while traveling by boat. They told Clark that his little army had not yet been detected, and that the people of Vincennes were still sympathetic to the Americans.

On February 21, Clark and his men crossed the Wabash River by canoe, leaving their packhorses behind. They marched towards Vincennes, sometimes in water up to their shoulders. The last few days were the hardest: crossing a flooded plain about 4 miles wide, they used the canoes to shuttle the weary from high point to high point.

Shortly before reaching Vincennes, they captured a villager known to be a friend, who informed Clark that they were still unsuspected. Clark sent the man ahead with a letter to the inhabitants of Vincennes, warning them that he was just about to arrive with an army, and that everyone should stay in their homes unless they wanted to be considered an enemy. The message was read in the public square. No one went to the fort to warn Hamilton. 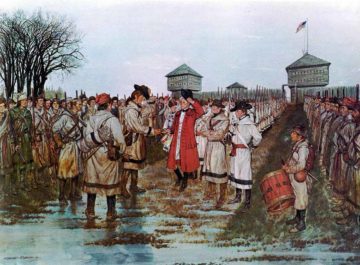 On February 23, Clark and his men marched into Vincennes at sunset, entering the town in two divisions, one commanded by Clark and the other by Bowman. Taking advantage of a slight elevation of land which concealed his men but allowed their flags to be seen, Clark maneuvered his troops to create the impression that 1,000 men were approaching.

While Clark and Bowman secured the town, a detachment was sent to begin firing at Fort Sackville. Despite the commotion, Hamilton did not realize the fort was under attack until one of his men was wounded by a bullet coming through a window.

Clark had his men build an entrenchment 200 yards in front of the fort's gate. While men fired at the fort throughout the night, small squads crept up to within 30 yards of the walls to get a closer shot. The British fired their cannon, destroying a few houses in the city but doing little damage to the besiegers. Clark's men silenced the cannon by firing through the fort's portholes, killing and wounding some of the gunners.

Meanwhile, Clark received local help: villagers gave him powder and ammunition they had hidden from the British, and Young Tobacco, a Piankeshaw chief, offered to have his 100 men assist in the attack. Clark declined the chief's offer, fearing that in the darkness his men might mistake the friendly Piankeshaws and Kickapoos for one of the enemy tribes that were in the area.

On February 24, at about 9:00 AM, Clark sent a message to the fort demanding Hamilton's surrender. Hamilton declined, and the firing continued for another two hours until Hamilton sent out his prisoner, Captain Helm, to offer terms. Clark sent Helm back with a demand of unconditional surrender within 30 minutes, or else he would storm the fort. Helm returned before the time had expired and presented Hamilton's proposal for a three-day truce. This too was rejected, but Clark agreed to meet Hamilton at the village church. 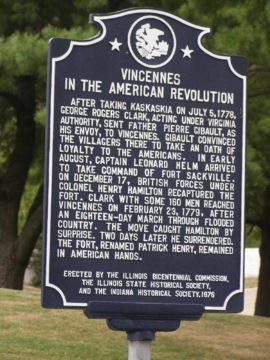 Before the meeting at the church, the most controversial incident in Clark's career occurred. Unaware that Clark had retaken Vincennes, a war party of Indians and French-Canadians came into town. There was a skirmish, and Clark's men captured six. Two of the prisoners were Frenchmen and were released at the request of the villagers and one of Clark's French followers. Clark decided to make an example of the remaining four Indian prisoners.

They were made to sit down in view of the fort and then tomahawked to death; the bodies were scalped and then thrown into the river. Although Hamilton did not witness the executions, he later wrote that Clark had killed one or more of the Indians with his own hands.

Some historians believe that Hamilton exaggerated because, after being imprisoned by the Americans for war crimes, he had motivation to make his captors seem even worse. Clark did not claim to have been one of the executioners, but he wrote about the killings without apology, believing them to be justifiable revenge for murdered Kentucky settlers and a means to intimidate Indians into stopping their raids. At the church, Clark and Bowman met with Hamilton and signed terms of surrender.

On February 25, at 10:00 AM, Hamilton's garrison of 79 men marched out of the fort. Clark's men raised the American flag over the fort and renamed it Fort Patrick Henry. Clark sent Hamilton, seven of his officers, and 18 other prisoners to Williamsburg. French-Canadians who had accompanied Hamilton were paroled after taking an oath of neutrality.

Clark had high hopes after his recapture of Vincennes. "This stroke", he said, "will nearly put an end to the Indian War." In the coming years of the war, Clark attempted to organize a campaign against Detroit, but each time the expedition was called off because of insufficient men and supplies.

Meanwhile, settlers began to pour into Kentucky after hearing news of Clark's victory. In 1779, Virginia opened a land office to register claims in Kentucky, and settlements such as Louisville were established.

The winter expedition was Clark's most significant military achievement and became the source of his reputation as an early American military hero. Clark was credited with capturing the fort without losing a single soldier. When news of his victory reached Gen. Washington, Clark's success was celebrated and was used to encourage the alliance with France. Washington recognized his achievement had been gained without support from the regular army in men or funds.

After learning of Clark's initial occupation of the Illinois country, Virginia had claimed the region, establishing Illinois County, Virginia in December 1778. In early 1781, Virginia resolved to hand the region over to the central government, paving the way for the final ratification of the Articles of Confederation. These lands became the Northwest Territory of the United States.