The Battle of Minisink

The Battle of Minisink was the only major skirmish fought in the northern Delaware Valley. The battle was a decisive British victory, as the colonial militia was hastily assembled, ill-equipped, and inexperienced.

Facts about the Battle of Minisink 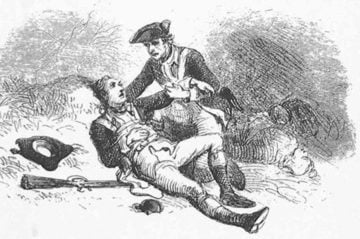 Dr. Benjamin Tusten cared for the injured at Hospital Rock when he and 17 others were killed at the Battle of Minisink

Although British forces were largely concentrated on Manhattan Island, Joseph Brant, a Mohawk war chief and a Captain in the British Army, was sent along with his Brant's Volunteers on a quest for provisions, to gather intelligence on the Delaware in the vicinity of Minisink, and to disrupt the upcoming American Sullivan Campaign.

In July 1779, he received word that Brigadier General Kazimierz Pulaski's forces had moved into Pennsylvania, leaving much of the Delaware Valley undefended. Brant led his force of Loyalists and Iroquois raiders through the valley, with the goal of seizing supplies and demoralizing the colonists. With Brant's force of 60 tribesmen and 27 Tories disguised as Indians in pursuit, the settlers were forced to flee to more populated areas.

On July 20, Brant reached Peenpack, which he attacked immediately. Brant ordered that "they should not kill any women or children" or Loyalists and to take prisoner any who surrendered. His raid was a crushing success and, leaving Fort Decker and the settlement in ruins, Brant and his force continued north along the Delaware River. 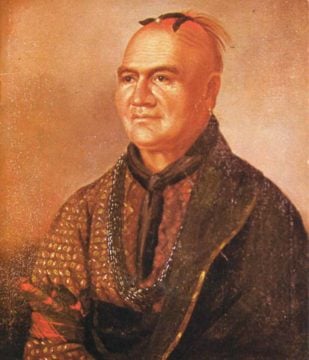 On July 20, Brant swept through the Neversink Valley settlements of Peenpack and Mahackamack, destroying farms, a school, a church, and other buildings, leaving a path of misery and bringing great fear to the frontier.

On July 21, after an alarm had gone out, two groups of militia led by Lieutenant Colonel Benjamin and Major Samuel Meeker met in Mahackamack (Port Jervis). They began to follow Brant up the Delaware River with the intent to ambush him and to recover some of the horses, cattle and personal items his group had taken.

Later that day, riders from Peenpack reached the village of Goshen, telling of Brant's raid and the destruction of the town. A militia formed immediately, under the reluctant command of Lieutenant Colonel Benjamin Tusten.

Tusten was strongly opposed to pursuing the raiders, as he knew they would be no match for the British and Iroquois soldiers, and he suggested waiting for reinforcements from the Continental Army.

However, the majority of the public and the militia underestimated the fighting ability of the Iroquois and demanded immediate retribution. Outvoted, Tusten agreed to set out the following morning. Colonel John Hathorn's Fourth Orange County Regiment militia unit met up with Meeker and Tusten's units somewhere near Sparrowbush, New York and joined forces. Hathorn assumed command and marched for the Delaware River with a force of about 120 militiamen. 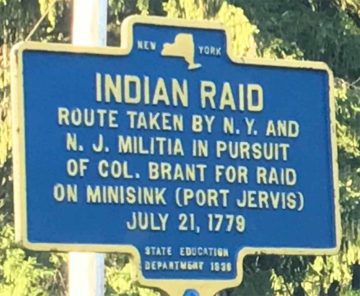 On July 22, the militia moved into position that morning in the hills above the Delaware River, intending to ambush Brant's forces who were crossing at Minisink Ford. Hathorn split them into a group of skirmishers and two units comprising the main force. Before the ambush was set, however, a shot was fired in haste by Bazaliel Tyler, one of the skirmishers.

This mistake alerted Brant to the trap, and he quickly outflanked the two groups of colonials, many of whom fled. Separated from the main unit and with his forces scattered, Hathorn was unable to regroup his men for a counterattack.

The Patriots began a rushed retreat up to the top of the hill overlooking the river in an effort to regain the strategic advantage. Only about 45 or 50 of the original group were left. After several hours of continuous volleys, insufficient ammunition and close quarters caused the battle to devolve into hand-to-hand combat, at which the Iroquois excelled. Brant and his forces finally broke through their small defensive square and the battle ended with remaining militia men and officers killed or scattered. 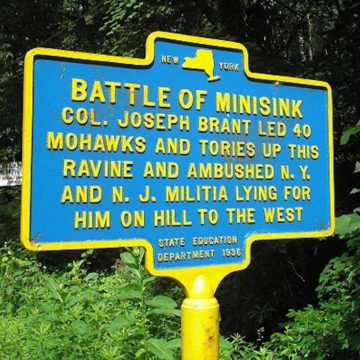 After the battle, Brant and his men forded the Delaware River and continued on to their encampment at the Susquehanna River. Three weeks later, the Continental Army sent 3,000 troops to avenge Minisink and Goshen, destroying every Iroquois village in their path. Brant finally met his defeat in late August, at the Battle of Newtown.

The town of Goshen was unable to bury its dead for 43 years, as the battlefield was too distant and the way too dangerous. In 1822, a committee was formed to travel to the battlefield and comb the area for remains. The few bones recovered were buried in a mass grave, first in Barryville and later moved to the village of Goshen. A stone obelisk was erected for the centennial of the battle, engraved with the names of the dead.