The Siege of Boonesborough

Blackfish's siege was unsuccessful and was lifted after ten days. Boone was then court-martialed by fellow officers who suspected him of having British sympathies. Boone was acquitted, but he soon moved away from Boonesborough.

Facts about the Siege of Boonesborough 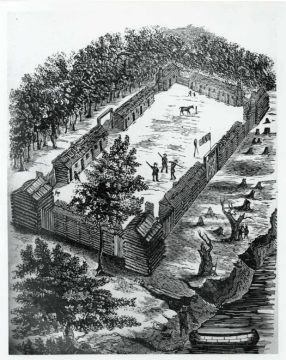 On September 7, Blackfish's force arrived outside Boonesborough. The former were mostly Shawnees, with a number of Cherokees, Wyandots, Miamis, Delawares, and Mingos. The latter were French-Canadian militiamen from Detroit, former French subjects now fighting on behalf of the British Crown. Although this was the largest force yet sent against the Kentucky settlements, taking a fortified position like Boonesborough would still be difficult without artillery to reduce the stronghold.

Blackfish called Boone out of the fort for a parley and reminded Boone of his promise to surrender the settlement. Blackfish presented letters from Governor Hamilton which proclaimed that the settlers would be well treated and taken to Detroit if they surrendered. If they did not surrender, there were no guarantees.

Boone told Blackfish that he would present the offer to the others. He could not make this decision himself, Boone said, since during his captivity other officers had assumed command.

Back in the fort, Boone outlined the situation. The consensus was to fight rather than surrender. The decision was made to prolong the negotiations with Blackfish as long as possible, since reinforcements from Virginia were expected. Boone and Major William Bailey Smith went outside again and told Blackfish that they feared that the trip to Detroit would be too hard on the women and children.

Blackfish pointed out that he had brought 40 horses to transport those unable to walk. Boone asked for another day to consult with the others. Leaders from the two sides smoked a ceremonial pipe together to mark the peace agreement, and then broke off negotiations for the day.

Over the next two days, settlers in the fort prepared for the siege. Based on faulty intelligence received from Hamilton in Detroit, Blackfish believed that there were at least 200 militiamen in the fort, when in fact there were only about 40 effective gunmen inside. The Kentuckians reinforced the illusion of a greater number of men by having some of the women in the fort carry weapons while dressed in men's clothing.

On September 8, in the evening, Blackfish and Boone met again. Boone told a surprised Blackfish that the fort would not surrender. Blackfish proposed that a formal treaty conference with all of the leaders be held on the next day.

On September 9, the treaty session began with leaders from the two sides sharing a meal outside the fort. Afterwards, the council began. In case of trouble, both sides had gunmen covering the meeting from a distance. Blackfish demanded to know "by what right had the white people taken possession of this country." Boone replied that they had bought the land from the Cherokees at Sycamore Shoals.

A Cherokee chief confirmed that this was true. Blackfish accepted this answer and then proposed that if the settlers would pledge their allegiance to the king of Great Britain, the Shawnees would accept the Ohio River boundary and both sides would live in peace. A treaty to this effect was then signed.

The Shawnees then approached the Americans to shake hands and seal the agreement. What happened next is unclear. According to one popular interpretation, the Shawnees, having failed to secure the surrender of Boonesborough, attempted to seize the American leaders.

A scuffle broke out, and marksmen from both sides opened fire. Despite a few injuries, all but one of the Americans managed to scramble back into the fort-the last one had to take cover next to a tree stump by the main gate. The Indians rushed the gate but were driven back by heavy gunfire. Negotiations were over; the formal siege had begun.

The last delegate spent a harrowing day with the battle raging around him. He finally managed to crawl inside when someone opened the gate slightly after nightfall.

Gunfire was exchanged over the next several days. After the initial flurry of shooting, Boone urged the Kentuckians to conserve their gunpowder. At night, Native Americans ran up to the walls and attempted to throw burning torches onto the roofs of the houses within. This was ineffective, however, because the warriors made easy targets for the Kentucky marksmen.

On September 11, Antoine Dagneaux de Quindre, in command of the Detroit militia, convinced the Indians to begin digging a tunnel from the bank of the river towards the fort. Known as mining, the goal was to place barrels of gunpowder in the tunnel under a section of the fort's walls. When these barrels were exploded, the wall would collapse, leaving a place for the attackers to rush in.

When the defenders inside the fort heard the digging, they began to dig a countermine, hoping to collapse the attackers' tunnel prematurely. The diggers on both sides began to yell taunts at each other. Heavy rains caused the Indians' tunnel to collapse before it reached the fort.

Boone's brother, Squire Boone, fashioned a makeshift wooden cannon, reinforced with iron bands, which was fired once or twice at groups of Indians before it cracked. Squire Boone also made squirt guns out of old musket barrels, which were used to put out fires on the roofs.

On September 17, the Shawnees launched their final assault, again trying to set fire to the fort. They were beaten back, and a heavy rain helped to put out the fires. The Shawnees lost more men killed in this attack than on all previous days. The next day, they gradually broke off the siege. They separated into scattered war parties and raided other settlements, inflicting far more damage in their traditional mode of warfare than they had done during the siege.

After the siege, Colonel Richard Callaway brought charges against Boone, alleging that Boone "was in favour of the British government." Joining Callaway was Captain Benjamin Logan from nearby Logan's Station. Logan and Callaway both had nephews who had been surrendered by Boone at the salt licks and were still prisoners. In the court-martial proceedings, held at Logan's Fort, there were four charges against Boone:

-Boone had surrendered the salt making party without a fight;
-While in captivity, Boone had promised to surrender Boonesborough to the British;
-After his return, he had led the Paint Lick expedition, which weakened Boonesborough at a time when
Blackfish's army was expected;
-Boone had exposed the officers to ambush by agreeing to meet the Indians at the peace treaty outside the fort.

After listening to all the testimony, the court found Boone "not guilty", and even promoted him to major because of his actions. Despite this vindication, Boone was humiliated by the episode.

Boone then went to North Carolina to retrieve his family, who had returned there during his captivity, believing him to be dead. When Boone came back to Kentucky, he established a new settlement called Boone's Station rather than resettle in the place where he had been court-martialed.

While Boone was in North Carolina, a retaliatory raid was launched against Blackfish's town of Chillicothe in the spring of 1779. Blackfish successfully defended his village but was shot in the leg and later died when the wound became infected.

On March 8, 1780, Callaway was caught outside Boonesborough by Shawnees and was killed, scalped, and mutilated.