The Battle of Crooked Billet

The Battle of Crooked Billet was a battle in the Philadelphia campaign fought near the Crooked Billet Tavern (present-day Hatboro, Pennsylvania). In the skirmish action, British forces launched a surprise attack against Brigadier General John Lacey and three regiments of Pennsylvania militia, who were literally caught sleeping.

The British inflicted significant damage, and Lacey and his forces were forced to retreat into neighboring Bucks County.

Facts about the Battle of Crooked Billet 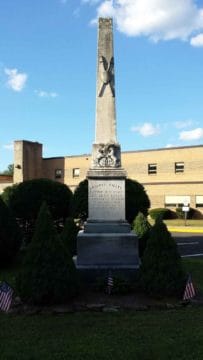 In late April, Lacey began a series of maneuvers and patrols across the area that ended with his arrival on April 27 at the Crooked Billet Tavern in present-day Hatboro. One of his straggling companies was attacked by a British patrol, and Loyalist spies informed Major John Graves Simcoe, leader of the Loyalist Queen's Rangers, of Lacey's whereabouts.

In Philadelphia, General William Howe ordered Simcoe, to "secure the country and facilitate the inhabitants bringing in their produce to market." During the winter of 1778, British and Loyalist troops repeatedly led raids into Bucks County, despite the presence of Lacey and the militia.

In April, Simcoe secured permission from Howe to launch an attack on Lacey and his militia.

On April 30, during the afternoon, he and Lt. Col. Robert Abercromby led their contingent of troops out of Philadelphia and towards the Crooked Billet. By then, Lacey's troops numbered about 400, including fresh arrivals from Cumberland and York Counties.

That night, Lacey ordered Lieutenant William Neilsen to begin a patrol between 2:00 and 3:00 AM, and ordered the brigade of Thomas Downey to stand on alert. Neilsen failed to follow his orders, and his patrol only left camp shortly before daybreak on May 1. They had not gone far when they spotted the advancing British. 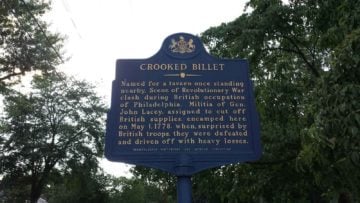 On April 30, the British dispatched a joint force of British troops and Hessians, and they surprised the American forces whose commander was still in bed. The British had surprised the Americans and attempted to cut them off with a "pincer" type movement. Bands of Loyalists and British horsemen grew increasingly bold, and their raids into Lacey's sector were becoming more frequent.

On May 1, during the morning, Lacey found his camp near the Crooked Billet Tavern virtually surrounded by the British. Though outnumbered, Lacey rallied his troops during the initial attack and was able to withdraw to a nearby wooded area and make a stand.

After repulsing a cavalry charge, he decided to continue moving, and had his troops withdraw further. Skirmishing continued for some two miles before his troops turned to the left, broke free and made a move back towards the Billet. At this point, the British broke off, withdrawing towards Philadelphia. The Americans were soon routed and forced to retreat into Warwick, and they lost all their supplies and equipments at their bivouc site.

What Lacey's troops found on their return to the field was a scene of carnage. Bodies of their fallen comrades bayoneted and cutlassed beyond need, and others who had been covered in straw and set afire. Judging from their posture, it appeared that some of these victims were still alive when set on fire.

Later, depositions were taken from persons who witnessed British troopers brag of bayoneting militiamen after accepting their surrender and of throwing wounded militiamen into fires of buckwheat straw.

"The clash occurred on May 1, during the British occupation of Philadelphia. The militia, commanded by Gen. John Lacey and assigned to cut off British supplies, was encamped here. Surprised by British troops, they were defeated and driven off with heavy losses. On Thursday night last, a small party of the British infantry, dragoons, and Queen's rangers, with a few of Capt. HOVEDEN's Pennsylvania, and Capt. JAMES's Chester dragoons, left the city about eleven o'clock, and proceeded up the Old York road.

About a mile beyond the Billet they fell in with Lacey's brigade of militia, consisting of about 500 men, and immediately attacked them: Lacey, at first, made some appearance of opposition, but, in a few seconds, was thrown into confusion, obliged to retreat with precipitation, and were pursued about 4 miles. They left between 80-100 dead on the field; and on Friday, between 50-60 prisoners, besides wagoners, with 10 of their waggons loaded with baggage, flour, salt, whiskey, &c. were brought in by the troops on their return: What number of rebels were wounded, we have not been able to learn. Besides the above wagons, 3 were burnt after taking out the horses; also all the huts and what baggage could not be brought off. The royal party did not lose a single man on this occasion, and have only 7 men wounded, and 2 horses killed."

The inhabitants, released from the harsh conditions of a siege life, and from the poor treatment to which they were subjected, hailed General George Washington as their deliverer.

Congratulations between those who had been confined within the British lines during the Siege of Boston, and those who were excluded from entering them, were exchanged with an enthusiasm which cannot be described. Washington was honored by Congress with a vote of thanks.

The Massachusetts council and House of Representatives praised Washington in a joint address, in which they expressed their good wishes in the following words:

“May you still go on approved by Heaven, revered by all good men, and dreaded by those tyrants who claim their fellowmen as their property.”

The British senior military leaders, of the Boston campaign, were criticized for their actions. For his failures during the Siege of Boston, Howe was greatly criticized in both British press and Parliament, though he remained in command for two more years to come and led the New York and New Jersey Campaign and the Philadelphia Campaign.

General Thomas Gage was never given another combat command and Lieutenant General John Burgoyne saw action in the Saratoga Campaign that ultimately led to his capture. General Henry Clinton commanded the British forces after Howe from 1778-1782 when the war ended.

Many Loyalists in Massachusetts left with the British. Some went to rebuild their lives in England and some returned to America following the war. Most stayed in Nova Scotia and settled in places like Saint John.

Boston ceased to be a military target after the siege. It did continue to be a focal point for many activities during the war though. Its port was an important point for fitting war ships and privateers.

Washington knew there was little time for rejoicing. He rightly suspected that the British would head for New York City.

In April, the local militias disbanded and went to back their homes. Washington took most of the Continental Army to fortify New York City and the start of the New York and New Jersey campaign.

March 17 is now celebrated as "Evacuation Day," when 11,000 redcoats and hundreds of Loyalists left the city by boat.