The Battle of Oriskany 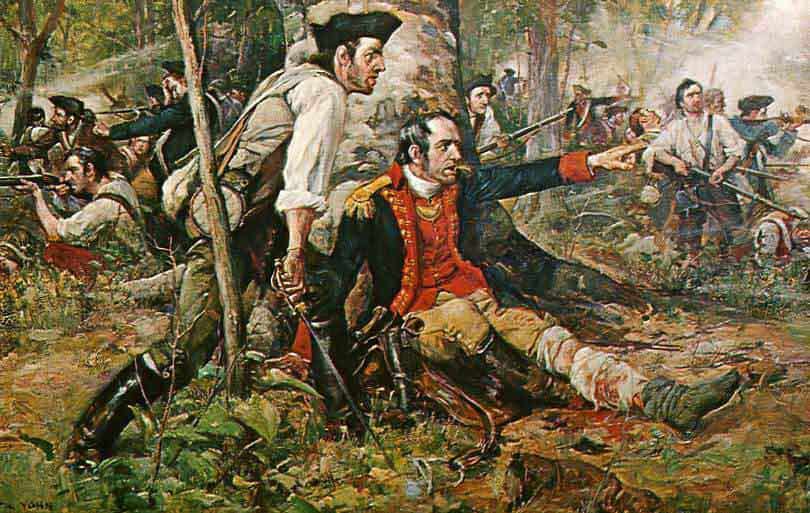 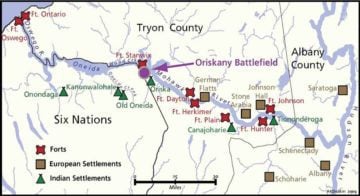 The Battle of Oriskany was one of the bloodiest battles in the North American theater of the Revolutionary War and a significant engagement of the Saratoga Campaign 1777. An American party trying to relieve the Siege of Fort Stanwix was ambushed by a party of Loyalists and allies of several Native American tribes, primarily Iroquois.

This was one of the few battles in the war in which almost all of the participants were North American: Loyalists and allied Indians fought against Patriots and allied Oneida in the absence of British regular soldiers.

Early in the siege of Fort Stanwix, an American relief force from the Mohawk Valley under Brigadier General Nicholas Herkimer, numbering around 800 men of the Tryon County militia, and a party of Oneida warriors, approached in an attempt to raise the siege. British commander Brigadier General Barry St. Leger authorized an intercept force consisting of a Hanau Jäger (light infantry) detachment, Sir John Johnson's King's Royal Regiment of New York, Indian allies from the Six Nations, particularly Mohawk and Seneca; and other tribes to the north and west, and Indian Department Rangers, totaling at least 450 men.

The Loyalist and Indian force ambushed Herkimer's force in a small valley about six miles east of Fort Stanwix, near the present-day village of Oriskany, New York. During the battle, Herkimer was mortally wounded. The result of the battle remains ambiguous. The apparent Loyalist victory was significantly affected by a sortie from Fort Stanwix in which the Loyalist camps were sacked, spoiling morale among the allied Indians.

Each nation was highly decentralized, and there were internal divisions among bands of the Oneida, some of whom also migrated to Canada as allies of the British. The site is known in oral histories of the Iroquois nations as "A Place of Great Sadness."

Facts about the Battle of Oriskany 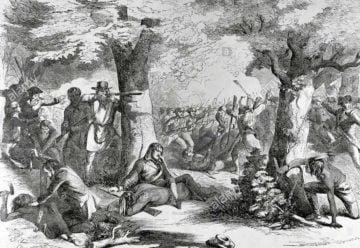 Alerted to the possibility of a British attack along the Mohawk River, Nicholas Herkimer, the head of Tryon County's Committee of Safety, issued a proclamation on July 17 warning of possible military activity and urging the people to respond if needed. Warned by friendly Oneidas on July 30 that the British were just four days from Fort Stanwix, Herkimer put out a call-to-arms. The force raised totaled 800 from the Tryon County militia; it was composed primarily of poorly trained farmers, who were chiefly of Palatine German descent.

On August 4, the column marched out and then camped near the Oneida village of Oriska on August 5. While a number of the militia dropped out of the column due to their lack of conditioning, Herkimer's forces were augmented by a company of 60 to 100 Oneida warriors, led primarily by Han Yerry.

That evening, Herkimer sent three men toward the fort with messages for the fort's commander, Colonel Peter Gansevoort. Gansevoort was to signal the receipt of the message with three cannon shots, and then sortie to meet the approaching column. Due to difficulties in penetrating the British lines, these couriers did not deliver the message until late the next morning, after the battle was already underway.

On August 5, St. Leger learned from a messenger sent by Molly Brant to her brother Joseph Brant, the Mohawk leader who led a portion of St. Leger's Indian contingent, that Herkimer and his relief expedition were on their way. St. Leger sent a detachment of light infantry from Sir John Johnson's Royal Yorkers toward the position that evening to monitor Herkimer's position, and Brant followed early the next morning with about 400 Indians and Butler's Rangers. Although many of the Indians were armed with muskets, some only carried tomahawks and spears. 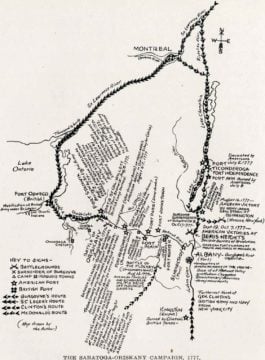 On the morning of August 6, Herkimer held a war council. Since his force had not yet heard the expected signal from the Fort Stanwix, he wanted to wait. However, his captains pressed him to continue, accusing Herkimer of being a Tory because his brother was serving under St. Leger. Stung by these accusations, Herkimer ordered the column to march on toward Fort Stanwix.

About six miles from the fort, the road dipped more than 50 feet into a marshy ravine, where a stream about three feet wide meandered along the bottom. Sayenqueraghta and Cornplanter, two Seneca war chiefs, chose this place to set up an ambush. While the King's Royal Yorkers waited behind a nearby rise, the Indians concealed themselves on both sides of the ravine.

The plan was for the King's Royal Yorkers to stop the head of the American column, after which the Indians would attack the extended column. At about 10:00 AM, Herkimer's column, with him on horseback near the front, descended into the ravine, crossed the stream, and began ascending the other side. 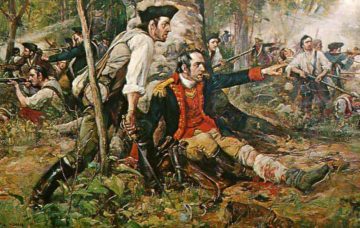 The Battle of Oriskany

Contrary to the plan, the Indians lying in wait near the rear of the column, apparently unable to contain themselves any longer, opened fire, taking the column completely by surprise. Leading the 1st Regiment (Canajoharie district), Colonel Ebenezer Cox was shot off his horse and killed in the first volley. Herkimer turned his horse to see the action, and was very shortly thereafter struck by a ball, which shattered his leg and killed the horse. He was carried by several of his officers to a beech tree, where his men urged him to retire from further danger. He defiantly replied, "I will face the enemy", and calmly sat leaning against the tree, smoking a pipe and giving directions and words of encouragement to the men nearby.

As the trap had been sprung too early, portions of the column had not yet entered the ravine. Most of these men panicked and fled; some of the attacking Indians pursued them, resulting in a string of dead and wounded that extended for several miles. Between the loss of the column rear and those killed or wounded in the initial volleys, only about one half of Herkimer's men were likely still fighting thirty minutes into the battle.

Some of the attackers, notably those not armed with muskets, waited for the flash of an opponent's musket fire before rushing to attack with the tomahawk before the enemy had time to reload, a highly effective tactic against those men who did not have bayonets. Louis Atayataronghta, a Mohawk warrior fighting with Herkimer's men, shot one of the enemy whose fire had been devastating in its accuracy, noting that "every time he rises up he kills one of our men". 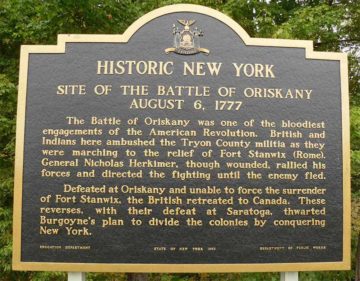 Herkimer's men eventually rallied, fighting their way out of the ravine to the crest just to its west. John Johnson, concerned about the militia's tenacity, returned to the British camp and requested some reinforcements from St. Leger shortly before a thunderstorm broke out. Another 70 men headed back with him toward the battle.

The thunderstorm caused a one-hour break in the fighting, during which Herkimer regrouped his militia on the higher ground. He instructed his men to fight in pairs: while one man fired and reloaded, the other waited and then only fired if attacked. Ordered to fire in relays, the pairs were to try to keep at least one weapon loaded at all times, to reduce the effectiveness of the tomahawk attacks.

John Butler, the leader of the rangers, took time during the thunderstorm to question some of the captives, and learned about the three-cannon signal. When Johnson and his reinforcements arrived, Butler convinced them to turn their coats inside out to disguise themselves as a relief party coming from the fort. When the fighting restarted, Johnson and the rest of his Royal Yorkers joined the battle, but one of the Patriot militiamen, Captain Jacob Gardinier, recognized the face of a Loyalist neighbor. Close combat, at times hand-to-hand fighting between neighbors, continued for some time.

When Herkimer's messengers reached the fort around 11:00 AM, Gansevoort began organizing the requested sortie. After the heavy thunderstorm passed, Lieutenant Colonel Marinus Willett led 250 men from the fort, and proceeded to raid the nearly deserted enemy camps to the south of the fort. Driving away the few British and Indians left in those camps and taking four prisoners along the way, the Americans collected blankets and other personal possessions from the Indian camps. They also successfully raided John Johnson's camp, taking his letters and other writings.

One of the Indians who had stayed behind to guard the camp ran to the battlefield to alert fellow warriors that their camps were being raided. They disengaged with cries of "Oonah, oonah!", the Seneca signal to retire, and headed for their camps. This forced the smaller number of German and Loyalist combatants to also withdraw.

Upon the withdrawal of the Natives and Loyalists, the Patriots who had not fled the scene attended to the evacuation of wounded, some of whom were taken by boat downriver to safety. Many wounded Patriots were left on the field. The dead were not buried for several years.

According to historical accounts, an hour into the battle, the creek ran red with the blood of the fallen; hence, the Battle of Oriskany was more commonly termed the Battle of Bloody Creek by local inhabitants in the decades that followed. The battle is known in British records as Herkimer's engagement out of respect for the American general's sacrifice and victory.

Sayenqueraghta, the principal war chief, proposed to continue the fighting by pursuing the Colonials down river to German Flatts, but St. Leger turned their proposal down. This battle marked the beginning of the civil war in the Iroquois confederacy. Brant's Mohawks burned the Oneida settlement of Oriske, while the Oneida's plundered Tiononderoge and Canajoharie. The Fort Hunter Mohawks were later subject to the same treatment. This caused most of the remaining Mohawks to flee to Canada.

The wounded Herkimer was carried by his men from the battlefield. His leg was amputated, but the operation went poorly and Nicholas Herkimer died August 16, 1777.

Loyalist John Butler commanded an Indian detachment in the battle. Butler's participation in this British victory resulted in his promotion to Lieutenant Colonel and being given command of Butler's Rangers.

On August 9, Marinus Willett left the fort and went to Albany to appeal for help. Brigadier General Benedict Arnold was dispatched and arrived at Fort Dayton with 800 troops and recruited 400 more.

On August 22, Arnold and his men marched on to Fort Stanwix. The British forces besieging the fort fled on hearing of the approach of Arnold's troops. The Indians were particularly reluctant to engage in another battle after their losses at the Battle of Oriskany. The British retreated through Lake Ontario to join up with Burgoyne, causing this prong of the Saratoga Campaign to collapse.

Because of the small population of settlers in the Mohawk Valley, the patriot losses sustained at the Battle of Oriskany were almost overwhelming to the community. Some families lost all male members; hardly any family escaped unscathed. Furthermore, combatants often found themselves fighting relatives who happened to choose the opposing side. Germans, Indians and English died on both sides.