The Siege of Fort Miffin (Second)

The Siege of Fort Mifflin or Siege of Mud Island Fort saw British land batteries commanded by Captain John Montresor and a British naval squadron under Vice Admiral Richard Howe attempt to capture an American fort in the Delaware River. The operation finally succeeded when the wounded Smith's successor, Major Simeon Thayer, evacuated the fort on the night of November 15 and the British occupied the place the following morning.

After General William Howe's British-Hessian army occupied Philadelphia on September 26, 1777, it became necessary to supply his troops. Fort Mifflin, on Mud Island in the middle of the Delaware River, and Fort Mercer at Red Bank, New Jersey, together with river obstructions and a small flotilla under Commodore John Hazelwood prevented the Royal Navy from shipping provisions into the city.

With Philadelphia effectively blockaded by the Americans, the Howe brothers were forced to lay siege to Fort Mifflin in order to clear the river. A Hessian attempt to storm Fort Mercer failed with heavy losses on October 22 in the Battle of Red Bank. Two British warships which had run aground near Mud Island were destroyed the next day.

General George Washington reinforced Fort Mifflin throughout the siege, but the garrison never numbered more than 500 men. After a few setbacks, the British finally assembled enough artillery and warships to bring Fort Mifflin under an intense bombardment beginning on November 10.

No longer able to reply to the British bombardment, Thayer ordered the survivors to row across to New Jersey in the night and left the flag flying. Fort Mercer was abandoned soon afterward, opening the Delaware and permitting the British to hold Philadelphia until June 1778.

Facts about the Siege of Fort Miffin (Second) 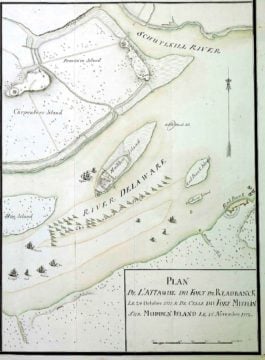 Map of the Battle of Fort Miffin

On September 22, Howe outmaneuvered Washington and won an unopposed crossing of the Schuylkill near Valley Forge.

On September 26, the British army occupied the American capital of Philadelphia. In the face of the British advance, the Second Continental Congress fled first to Lancaster then to York, Pennsylvania. During the summer of 1777, Washington was trying to strengthen Philadelphia's river defenses.

The Mud Island Fort was designed and begun by British engineer Captain John Montresor in 1771. The river front was shielded by a stone face, but then the work stopped due to a shortage of money. After the outbreak of war, the rest of the fort's defenses were completed with wooden palisades and earthen ramparts, despite the infighting among the French engineer officers. There were wooden barracks for the enlisted men along the west and north sides of the fort. Nearby was a two-story building to accommodate officers.

According to one of the defending soldiers, a battery of 18-lb.artillery pieces stood at the southeast end of Mud Island. On the southwest end, one 32-lb.and four or five 12-lb.and 18-lb.cannons guarded the river. Three 12-lb.guns covered the northwest end of the island. Another account states that ten 18-lb.guns made up the main battery while each of the four blockhouses contained four cannons.

A bristling set of sharpened logs surrounded the fort while the low ground along the shoreline was infested with trous-de-loups or wolf holes. Chevaux de frise prevented the British navy from ascending the Delaware River. Their iron tipped stakes threatened to tear the bottom out of any British ship whose master was reckless enough to make the attempt. 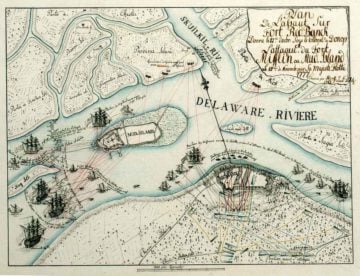 Cannons boom on the Delaware River. Hour after hour, day after day, British artillery on land and on ship have pounded Fort Mifflin, hunched over on its muddy little island in the river just off the Pennsylvania shore. Inside the fort, American soldiers hang on defiantly, keeping British ships from getting to Philadelphia with supplies badly needed by the redcoat army occupying the city.

The British have been trying for the better part of two months to break the American blockade of the Delaware River.

After the Fort Mercer fiasco, an impatient Howe ratcheted up the pressure on Fort Mifflin, the key to the defensive screen the Americans had thrown across the Delaware River just south of Philadelphia. The British had been bombarding Fort Mifflin since October 15.

On November 10, the British intensified their attack, beginning a round-the-clock bombardment. At times, the British fire was many as 1,000 cannonballs in 20 minutes. At the time, the fort itself is only partially completed when the siege began, making it difficult to defend.

After several days, the British batteries silenced nearly every piece of artillery at Fort Mifflin. "Our men were cut up like cornstalks... ," Joseph P. Martin recalled years later. "The whole area of the fort was as completely plowed as a field... . If ever destruction was complete, it was here." Off to the northwest of the city at Whitemarsh, Washington and his army could only wait helplessly, out of position to launch an attack that would break the siege.

The east and south walls, facing the river, are granite, but the north and west walls, facing the land, are palisades and packed dirt. After the British cannons battered the walls all day, the Americans would scramble to rebuild them at night. The Americans put up a valiant defense, even managing to silence a British battery, but they are outmanned and outgunned. British firepower turns the fort into a killing ground, with almost nowhere to hide.

On November 15, during the night, the American garrison bowed to the inevitable and abandoned Fort Mifflin, leaving the dead behind and the flag flying. Over half of the fort's American defenders were casualties. They "set fire to every thing that would burn, and then repaired immediately to the wharf where three bateaux were waiting to convey us across the river."

The siege of Fort Mifflin was over. Soon, Howe would be free to turn his attention once more to destroying Washington.

Across the river at Red Bank on the New Jersey side, Fort Mercer, the last American stronghold on the Delaware, hung on for another 5 days before Continental forces abandoned it on the night of November 21. A few small British ships arrive in Philadelphia the very next day, to be followed soon by other, larger vessels.

The British at last had their water route and a free flow of supplies to Philadelphia, but the stubborn American resistance had tied up the British for nearly 7 weeks. This allowed Washington to regroup after the hard fighting and marching of late summer and early fall.