The Battle of Fort Anne 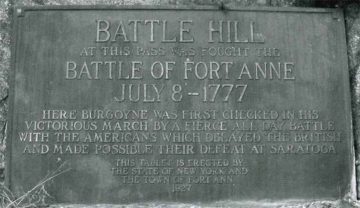 The Battle of Fort Anne was an engagement between Continental Army forces in retreat from Fort Ticonderoga and forward elements of Lieutenant General John Burgoyne's larger British army that had driven them from the fort. Burgoyne, surprised by the American withdrawal from Fort Ticonderoga, hurried as many of his troops as possible forward in pursuit of the retreating Americans.

The main body of the American forces had departed Fort Independence down the road to Hubbardton, and a smaller body of troops, accompanying the sick, wounded, and camp followers that had also evacuated the fort, had sailed up Lake Champlain to Skenesboro, moving from there overland to Fort Edward.

This group, which included about 600 men under arms, paused at Fort Anne, where a smaller advance company from Burgoyne's army caught up to them. The British, who were outnumbered, sent for reinforcements. The Americans decided to attack while they had the numerical advantage, and succeeded in nearly surrounding the British position about three quarters of a mile north of the fort.

The Americans retreated back to Fort Anne with the supposed arrival of British reinforcements. While this was a ruse, it saved the British force from probable capture. More of Burgoyne's army soon came down the road, forcing the Americans to retreat from Fort Anne to Fort Edward.

Facts about the Battle of Fort Anne

On July 6, after the Battle of Skenesboro, a large group of American defenders managed to escape being captured by the British. Burgoyne assigned the task of capturing these Americans to Lieutenant Colonel John Hill and 190 soldiers.

In an attempt to surround the American position, Burgoyne landed about 190 men from the 9th, 20th, and 21st Regiments, commanded by Hill, at a point south of Skenesboro with the objective of cutting off the road to Fort Anne.

The Americans were in the process of portaging around the falls at Skenesboro to Wood Creek when Burgoyne's boats arrived and opened fire. The Enterprise, Liberty, and Gates were destroyed by the Americans, and two ships, Trumbull and Revenge, were forced to surrender. In the process many of the American supplies were either destroyed or abandoned to the British.

The Americans retreated toward Fort Anne in disarray, but not before starting a fire that eventually engulfed most of the structures at Skenesboro. When they reached Fort Anne, they were met by 400 New York militia under Colonel Henry van Rensselaer, that had been sent by Major General Philip Schuyler from Fort Edward after he received news of the retreat from Fort Ticonderoga

On July 7, Hill's force set out pursuing the Americans by travelling along the 12 miles of the rugged wilderness road to Fort Anne. The fort was a small stockade fortification that was built in 1757, at the junction of Halfway Creek and Wood Creek, and was constructed on the stockade plan.

Before stopping for the night, Hill was able to capture several boatloads of American invalids, camp followers, and other baggage that were trying to escape up Wood Creek. Hill made camp about a mile outside of the fort. The camp was in a narrow, heavily wooded area between Wood Creek and a steep, 500-foot ridge. Here, they encountered an American reconnaissance party numbering about 170 under Captain James Gray.

On July 8, early in the morning, a supposed American deserter, who was really a spy, informed Hill that the fort was occupied by nearly 1,000 demoralized and feared a British attack. Opting not to attack the numerically superior force, Hill sent a message back to Burgoyne outlining the situation.

Burgoyne ordered the 20th and 21st Regiments to quick-march toward Fort Anne in support, but poor weather hampered their movement, not arriving until after the battle. The "deserter" returned to Fort Anne and reported on the British position and troop strength.

Long, seeing how few British soldiers were following him, decided to attack their position. Moving as stealthily as possible, his force tried to surround the British while they were still on the road. However, Hill's men heard the American movements on their flanks and retreated to a higher position, abandoning some wounded men, who were eventually captured by the Americans. When the Americans opened fire, it was "a heavy and well-directed fire", according to one British officer. 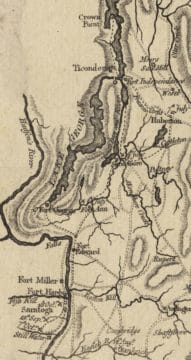 At 10:30 A.M., Rensselar readied his force and set out to attack Hill. When the attack began, Hill and his men scrambled up the steep ridge and fought off Rensselar's force for about two hours. Both sides were running out of ammunition. Hill was being attacked on all sides, virtually surrounded by the Americans, and was about to give an order to retreat. All of the sudden, both sides heard a loud Indian war whoop come from the north. Fearing that this was the British reinforcements and with his men running out of ammunition, Rensselar broke off contact and fled back to the fort.

As it turned out, there were no Indians, but only a single British officer, Captain John Money of the 9th Regiment, Burgoyne's deputy quartermaster. He had been leading a group of Indians, but when they seemed reluctant to fight the Americans, Money became impatient and ran ahead of them; it was his war cries that brought an end to the battle.

Back at Fort Anne, the Americans held a brief council. From a woman that the British had freed, they heard that 2,000 or more British troops, under the command of Brigadier General Phillips, were rapidly advancing. Rensselar's men burned down Fort Anne and withdrew to Fort Edwards.

Both sides claimed victory in the battle, since the British had successfully stood their ground, and the Americans had very nearly forced them to surrender.