The Battle of White Plains 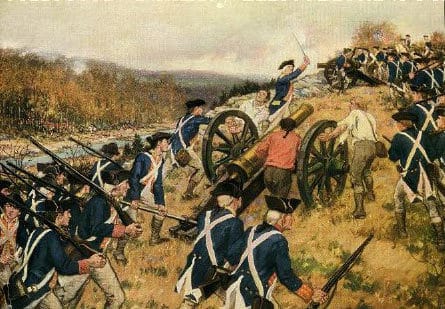 Later British movements chased Washington across New Jersey and into Pennsylvania. Washington then crossed the Delaware and surprised the Hessian troops in the Battle of Trenton.

Facts about the Battle of White Plains 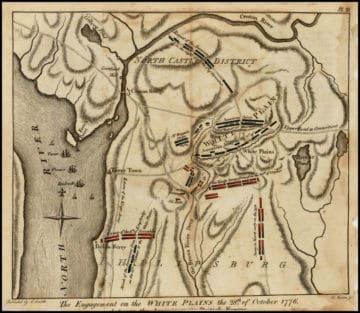 Old map of the Battle of White Plains

After the Battle of Long Island, the British army forced the Americans off of Manhatten Island. Howe pursued Washington slowly out of New York City into the countryside. Howe extended his own command in a line running from New Rochelle in the south to the village of Scarsdale in the north. Howe and his Tory sympathizers had a stronghold in New York City.

After Washington abandoned Manhatten Island, deployed his force in a lengthy defensive line in Westchester County, with the northern part at White Plains. White Plains was located 20 miles northeast of New York City. It was a rural and sparsely populated farming community. The terrain consisted of gently rolling hills through which ran the Bronx River Valley. His objective was to escape the encircling grasp of the British while evacuating tons of supplies before they could be captured by the superior British force.

At the urging of the Continental Congress, Washington had to leave some 2,800 troops, commanded by Colonel Robert Magaw, to occupy Fort Washington and another 3,500 troops under Major General Nathanael Greene to defend the opposite shore at Fort Lee. Their mission was to disrupt and prevent the British fleet from moving upriver above the forts and into the Hudson River Valley. 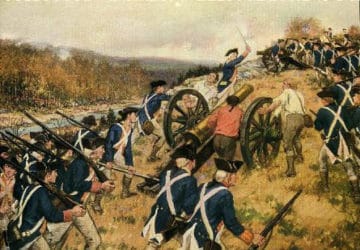 American troops at the Battle of White Plains

On October 22, Washington and his army arrived at White Plains. They joined their advance unit, which started arriving the day before, and began fortifying the three surrounding hills. At White Plains, Washington deployed his army along a width of 3 miles, including passing through the town. The right flank was commanded by Brigadier General William Heath, the center was commanded by Washington, and the right flank was commanded by Major General Israel Putnam. Howe was at New Rochelle, were he was not in any hurry to move against Washington. This gave the Americans time to arrive safely at their new position.

On October 27, the British advance guard arrived at White Plains. Chatterson's Hill rose 180 feet above the plain and the top was gently rounded with the hillsides being wooded and steep. The hilltop was divided into cultivated fields by stone walls. It was located to the right of the American line, across the Bronx River. At the time, Washington had not fortified this position.

Washington's conclave double-line front covered the town of White Plains. Facing south, the American line was anchored on the right flank (west) on Purdy Hill along the Bronx River and on the left beyond the town on Hatfield Hill near a large pond. The center was directly in front of the town. Beyond Washington's right, about a half mile on the far side of the river, was Chatterson's Hill. Initially, Washington did not percieve the hill as important enough to occupy.

On October 28, in the morning, the British entered Scarsdale and advanced towards White Plains. Howe received intelligence that Washington had concentrated his army and deployed it in a large shallow crescent below the village, with the narrow swollen Bronx River protecting the American right flank. Howe's advance was formed into two columns, one British and the other Hessian. Lieutenant General Henry Clinton commanded the British column and Major General Wilhelm von Heister commanded the Hessians.

Washington ordered Brigadier General Joseph Spencer to take 1,500-man detachment and two cannons to block the British in the plains between Chatterson's Hill and Scarsdale. Spencer had the front line manned by the Massachusetts militia and the second line was manned by the Delaware Continentals.

At 9:30 AM, once the delaying force made contact with the British, they returned and informed Washington that the British were approaching in two columns along the East Chester Road. Once at White Plains, Howe deployed his army in an open area about one mile in front of the American line. Howe spotted Chatterson's Hill and recognized that it as critical terrain. He planned the main attack against Chatterson's Hill while the rest of his army kept the rest of the American line occupied. 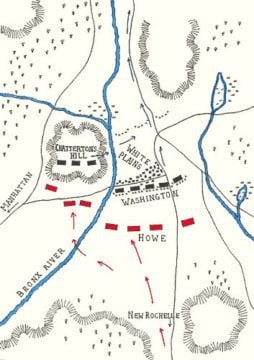 Map of Battle of White Plains

While Howe and his command conferred, the Hessian artillery on the left opened fire on the hilltop position at Chatterson's Hill, where they succeeded in driving the militia into a panicked retreat. The arrival of McDougall and his brigade helped to rally them, and a defensive line was established, with the militia on the right and the Continentals arrayed along the top of the hill.

After the artillery bombardment, a 4,000-man detachment was sent to attack the American position. First, Howe sent 3 Hessian regiments, commanded by Colonel Johann Rall, across the river, where they took up positions at some ridges about 1/2 mile from Chatterson's Hill. Next, the rest of the attacking force crossed a ford downstream, the made their way up the hill. Finally, the 17th Dragoons were sent on a cavalry charge, the first cavalry charge of the war.

Rall threatened Spencer's left flank. The militia paniced and was soon routed but the Continentals put up a stiff resistance before being forced to make an orderly withdrawal. The Americans were driven back across the river onto Chatterson's Hill. With the British now in close proximity, Washington suddenly realized the critical nature of Chatterson's Hill and decided to strengthen it. He ordered about 1,600 troops, comprised of Delaware Continentals and Maryland militia to assist in occupying the hill. This brought the hill's total defensive force to around 2,500 troops. Major General Alexander McDougall assumed command of the hill's force.

After Spencer's detachment was driven away, Howe moved his army into the flat land below the high ground and in front of the town in clear view of Washington. Howe then broke apart his command, sending 8 regiments to attack the high ground of Chatterson's Hill. He also positioned 20 cannons below Chatterson's Hill and opened fire on the American positions. McDougall was only able to fire a couple of shots before he was forced to abandon his cannons. 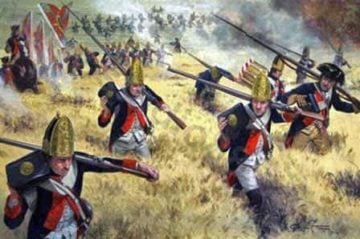 As the British artillery barrage continued, British and Hessian troops made their way under fire to the Bronx River. They then crossed the river and deployed to attack the hill.

Although many companies formed and repulsed several Hessian attacks, pressure against their front continued and the supporting troops were breaking for the rear. Unable to sustain a defense, the remainder of the Delaware troops were forced to make an orderly withdrawal from the field.

After the loss of Chatterson's Hill, Washington had little choice but to withdraw farther north, beyond the Croton River, to Castle Hill. At 5:00 P.M., the battle ended. Howe was content to hold onto Chatterson's Hill.

On October 30, Howe made plans for a general assault against Washington's army. Heavy rains and winds hampered any further manuevers for both commanders.

The two armies remained where they were for two days, while Howe reinforced the position on Chatterton Hill, and Washington organized his army for retreat into the hills north of White Plains. With the arrival of additional Hessian and Waldeck troops under Lord Percy on October 30, Howe planned to act against the Americans the following day. However, a heavy rain fell the whole next day, and when Howe was finally prepared to act, he awoke to find that Washington had again eluded his grasp.

On October 31, Washington withdrew his army into the hills to the north during the night, establishing a camp near North Castle. Howe chose not to follow, instead attempting without success to draw Washington out.

On November 1, the British advanced but found out that Washington and his army was gone, having withdrawn into the hills north of White Plains. Howe decided not to follow the Americans and allowed them to safely retreat into New Jersey.

On November 5, Howe withdrew his army from White Plains and returned to New York City, finishing evicting Continental Army troops from Manhattan. Howe accomplished this task with the Battle of Fort Washington.

Washington eventually crossed the Hudson River at Peekskill with most of his army, leaving New England regiments behind to guard supply stores and important river crossings. Later, British movements chased him across New Jersey and into Pennsylvania, and the British established a chain of outposts across New Jersey.