The Battle of Valcour Island 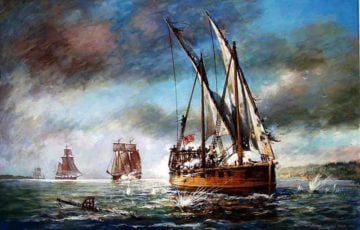 The naval Battle of Valcour Island, aka Battle of Valcour Bay, took place on Lake Champlain. The main action took place in Valcour Bay, a narrow strait between the New York mainland and Valcour Island. The battle is generally regarded as one of the first naval battles of the Revolutionary War, and one of the first fought by the United States Navy.

Most of the ships in the American fleet under the command of Brigadier General Benedict Arnold were captured or destroyed by a British force under the overall direction of General Guy Carleton. However, the American defense of Lake Champlain stalled British plans to reach the upper Hudson River Valley.

The Continental Army had retreated from Quebec to Fort Ticonderoga and Fort Crown Point in June 1776 after British forces were massively reinforced. They spent the summer of 1776 fortifying those forts, and building additional ships to augment the small American fleet already on the lake. Carleton had a 9,000 man army at Fort Saint-Jean, but needed to build a fleet to carry it on the lake. The Americans, during their retreat, had either taken or destroyed most of the ships on the lake.

By early October, the British fleet, which significantly outgunned the American fleet, was ready for launch.

On October 11, Arnold drew the British fleet to a position he had carefully chosen to limit their advantages. In the battle that followed, many of the American ships were damaged or destroyed. That night, Arnold sneaked the American fleet past the British fleet, beginning a retreat toward Crown Point and Fort Ticonderoga.

Unfavorable weather hampered the American retreat, and more of the fleet was either captured or grounded and burned before it could reach Crown Point. Upon reaching Crown Point, Arnold had the fort's buildings burned and retreated to Fort Ticonderoga.

Facts about the Battle of Valcour Island 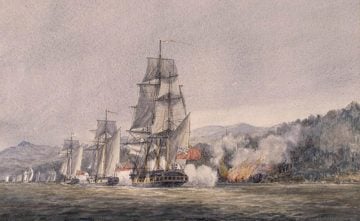 Following the failed American invasion of Canada, the British Navy launched a counteroffensive intended to gain control of the Hudson River Valley, which extends southward from Lake Champlain. Control of the upper Hudson River would have enabled the British to link their Canadian forces with those in British-occupied New York City, dividing the American colonies of New England from those in the South and Mid-Atlantic, and potentially finishing the revolution.

Access to the river's source was protected by American strongholds at Crown Point and Fort Ticonderoga, and elimination of these defenses would require the transportation of troops and supplies from the British-controlled St. Lawrence Valley to the north.

Roads were either impassable or nonexistent, making water transport over Lake Champlain the only viable option, but the only ships on the lake were in American hands, and even though they were lightly armed, they would have made transport of troops and stores impossible for the British. The two sides therefore set about building fleets; the British at St. Johns in Quebec and the Americans at the other end of the lake in Skenesborough.

The British had adequate supplies, skilled workmen, and prefabricated ships transported from England, including a 180-ton warship they disassembled and rebuilt on the lake. All told, the 30-ship British fleet had roughly twice as many ships and twice the firepower of the Americans' 16 vessels. 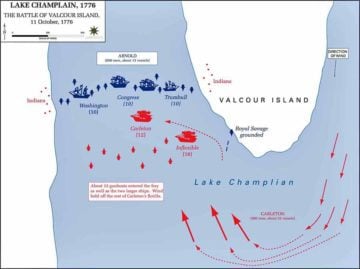 Map of the Battle of Valcour Island

Facing them were the ships of the British Royal Navy constructed in Quebec: The flagship HMS Inflexible; the schooners HMS Maria, HMS Carleton, HMS Royal Convert, the ketch HMS Thunderer, as well as over 20 gunboats armed with a single cannon. Arnold shrewdly chose to force the British to attack his inferior forces in a narrow, rocky body of water between the coast and Valcour Island, where the British fleet would have difficulty bringing its superior firepower to bear.

On October 11, the British fleet took up positions at noon around 300 yards in front of the American battle line with the small gunboats forward, and the five main ships around 50-100 yards behind the gunboats. The British then opened up a huge broadside against the American ships which continued for the next 5 hours.

During the exchange of cannon fire, the Revenge was heavily hit and abandoned. The Philadelphia, was also heavily hit and sank later at around 6:30 P.M. The Royal Savage, ran aground and was set on fire by the crew to prevent the ship from falling in British hands. The Congress, and Washington were heavily damaged, and the Jersey and New York, were also badly hit. 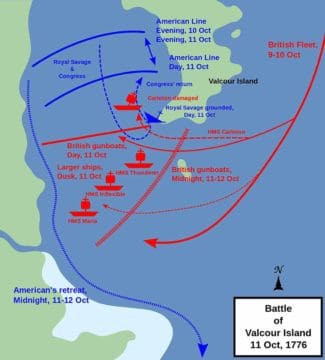 On the British side, casualties began mounting too. Carleton was heavily hit as it tried to land a boarding party on the grounded Royal Savage and was forced to withdraw under heavy fire. One small gunboat, commanded by Lt. Dufais, blew up and sank from a direct hit. Most of the other small gunboats were also hit, forcing them to withdraw and reform their battle line 700 yards from the American line. Two of the gunboats were so heavily damaged that they were forced to be scuttled after the action.

The battle was not going well for the Americans at sunset. Aware that he could not defeat the British fleet, Arnold decided to withdraw. He managed to sneak his fleet past (and through) the British fleet during the night and attempted to run for the cover of the shore batteries situated at the American-held fort at Crown Point at the south end of the lake. Unfortunately, the weather did not cooperate, and the Americans were caught short of their goal.

On October 12, after sailing only 8 miles, Arnold drove the Providence ashore in the shallow water of Buttonmold Bay off Schuyler Island where the heavier British ships could not follow. It was then stripped of guns, powder and everything else of use. The New Jersey also ran aground while the crew from the Lee did likewise.

On October 13, the British fleet finally caught up to the American fleet off Split Rock where the Washington was captured and the Congress sank attempting to flee. Arnold led about 200 men from the lost ships on foot to Crown Point where the remaining ships Trumbull, Enterprise, Revenge, New York, and Liberty finally reached safety. Arnold was forced to burn his remaining ships and withdrew further towards Fort Ticonderoga.

Arnold, convinced that Crown Point was no longer viable as a point of defense against the large British force, destroyed and abandoned the fort. He moved his forces stationed there to Ticonderoga. Carleton, rather than shipping his prisoners back to Quebec, returned them to Ticonderoga under a flag of truce. On their arrival, the released men were so effusive in their praise of Carleton that they were sent home to prevent the desertion of other troops.

With control of Lake Champlain, the British landed troops and occupied Crown Point the next day. They remained for two weeks, pushing scouting parties to within three miles of Ticonderoga. The battle-season was getting late as the first snow began to fall on October 20 and Carleton's supply line would be difficult to manage in winter. He decided to withdraw north to winter quarters; Arnold's plan of delay had succeeded.

The Saratoga Campaign 1777, led by Major General John Burgoyne, was halted by Continental forces, some led with vigor by Arnold, in the two battles at Saratoga (First and Second). Burgoyne's subsequent surrender paved the way for the entry of France into the war as an American ally.