The Battle of Sullivan's Island 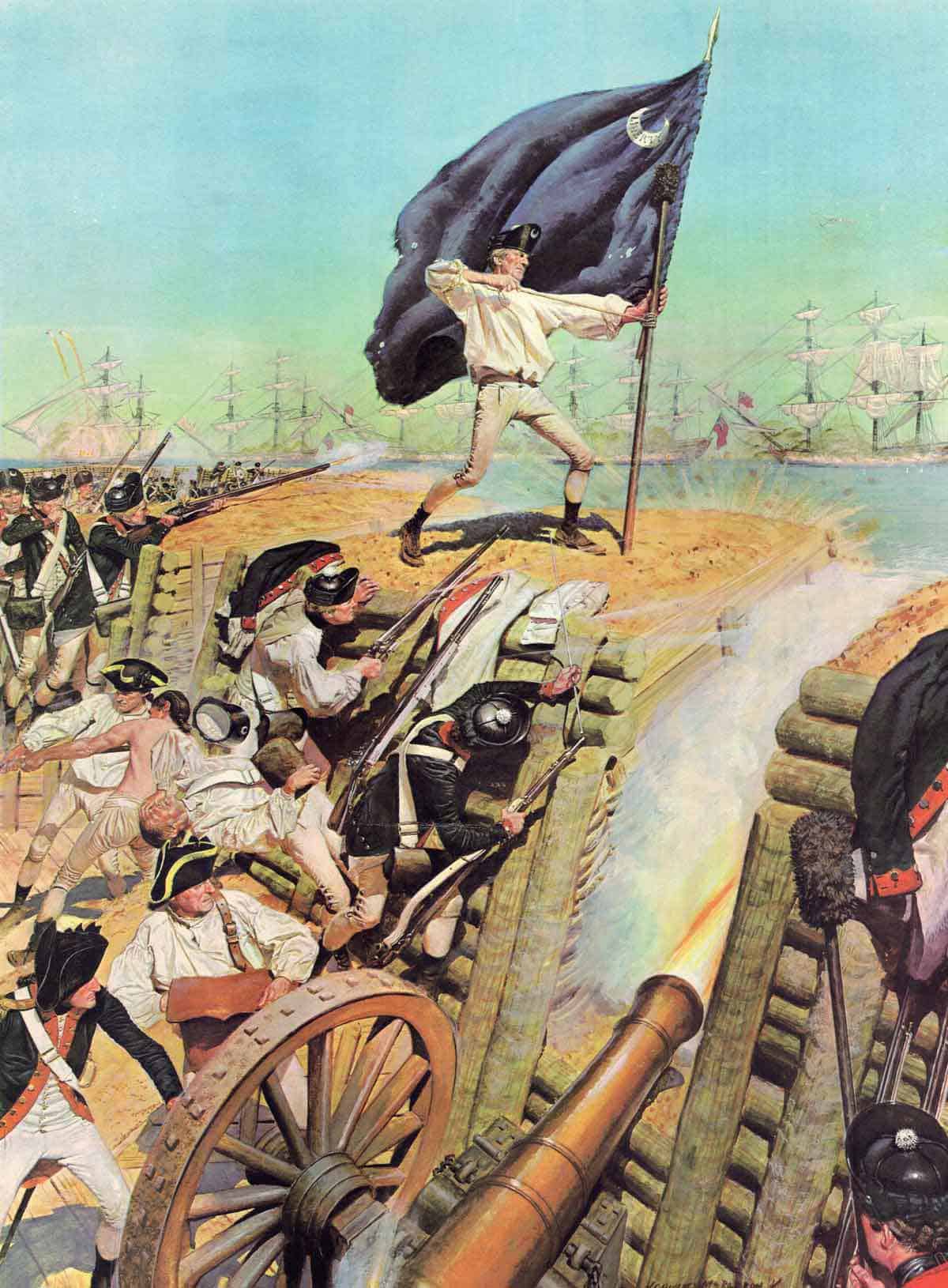 The Battle of Sullivan's Island (aka Battle of Fort Sullivan), took place near Charleston, South Carolina, during the first British attempt to capture the city from American rebels. It is also sometimes referred to as the First Siege of Charleston, owing to a more successful British siege in 1780.

In early 1776, the British organized an expedition for operations in the rebellious southern colonies. Delayed by logistical concerns and bad weather, the expedition reached the coast of North Carolina in May 1776.

The Unsuccessful Attack on the fort on Sullivan's Island, the 28th June,1776

The British land assault was frustrated when the channel between the two islands was found to be too deep to wade, and the American defenses prevented an amphibious landing. The naval bombardment had little effect due to the sandy soil and the spongy nature of the fort's palmetto log construction.

Careful fire by the defenders wrought significant damage on the British fleet, which withdrew after an entire day's bombardment. The British withdrew their expedition force to New York, and did not return to South Carolina until 1780.

Facts about the Battle of Sullivan's Island 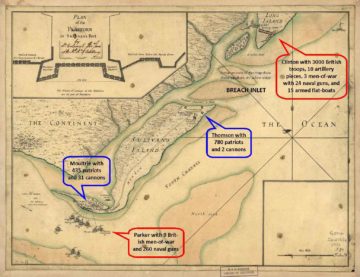 Sullivan Island was chosen because at the time because it was a geographic obstacle that shielded the harbor. A large vessel sailing into Charleston first had to cross Charleston Bar, a series of submerged sand banks lying about eight miles southeast of the city. Moultrie and his 2nd South Carolina Regiment arrived on the island in March 1776 and began construction of a fortress to defend the island and channel to Charleston Harbor. The construction moved slowly.

During late May, British frigates arrived to scout the area and observe the construction of the American fort on Sullivan's Island. The main British fleet arrived outside of Charleston Harbor on June 1. Moultrie observed British scout boat observing possible landing points on nearby Long Island (now called Isle of Palms) just a few hundred yards from Sullivan Island. Lee, the commander of the South Carolina troops, arrived a few days later and was put in command of the American land forces around Charleston.

On June 8, after most of the British fleet had crossed the bar and anchored in Five Fathom Hole, Clinton sent a proclamation to the Americans to lay down their arms or face military action, which Rutledge rejected the demand. With the fort on Sullivan Island only half complete, Parker was confident that his British warships would blast the fort into pieces.

The square-shaped Fort Sullivan made up of only the completed seaward wall, with walls made from Palmetto logs 16 feed wide and filled with sand, which rose 10 feet above the wooden platforms for the artillery. A hastly erected plaiside of thick planks helped guard the powder magazine and unfinished northern walls. A assortment of 31 hard-to-get cannon ranging from 9 lb. and 12 lb. as well as a few English 18-lb. and French 26-lb. dotted the front and rear walls. 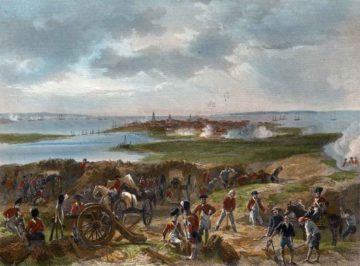 The British fleet to attack the fort made up of nine man-of-war ships, with the flagship being the 50-gun HMS Bristol, as well as the ships-of-the-line HMS Experiment, HMS Actaeon, HMS Active, HMS Solebya, HMS Syren, HMS Sphinx, HMS Friendship, and the bomb-vessel HMS Thunder, all mounting nearly 300 heavy cannon. Meanwhile, Clinton had landed most of his troops on nearby Long Island to cross the shallow sandbar to attack Fort Sullivan from the rear during the upcoming attack.

The British landed an amphibious force on nearby Long Island with the intention of crossing the shallow sandbar and attacking the northeastern end of Sullivan's Island and crushing the Americans in a pincher move. The British force was under the command of Clinton. He relied on poor reconnaisance, which reported that an assault could easily carry across Breach Inlet. A search for that shallow ford consumed several days and nights and yielded no possible route for an attack. The British were forced to watch Colonel William Thomson, with his Americans, prepare a formidable position to defend that extremity of the island. 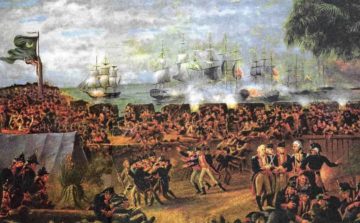 On June 26, the British naval forces were ready, having finally moved and refitted all their ships at Five Fathom Hole.

On June 27, the British attempted to set sail, but Maj. Gen. Henry Clinton put his troops ashore on Long Island, which was north of Sullivan's Island, while the fort was on the island's southern tip. Clinton then found it difficult to cross The Breach from Long Island onto Sullivan's Island. The British had incorrect intelligence of a shallow ford, when in truth the shallowest channel was 7 feet deep. But Clinton stubbornly spent several days searching for the elusive ford. When they finally tried crossing in boats, American riflemen and gunners held them off.

While Clinton continued his fruitless search, the last 2 British warships, HMS Bristol and the HMS Experiment, had to have their guns removed to lighten the boats enough to clear the bar. Heavy winds halted their movement. They now waited for favorable winds.

On June 28, when the British fleet loosed their sails in the morning, the Americans had only 28 rounds for each of their 26 guns. For this reason, Col. Moultrie ordered his men to wait 10 minutes between firing each round and to concentrate only on the ships nearest the fort.

The British fleet, commanded by Adm. Parker, consisted of 20 ships,with only 9 ships being armed. The entire fleet had a total of 270 guns. The British relied on pilots who had been impressed into their service. The pilots were ordered to bring the first ships to anchorage close enough so that the others could anchor very near the fort. The battle plan called for a sally, to be conducted by 3 other ships, to go around to the western side of the fort and fire into the unfinished portion. A bomb ketch, armed with a large mortar, was to fire into the fort. 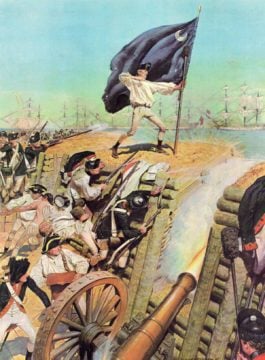 As the battle began, the tide immediately began to turn against the British--literally. The pilots refused to bring the warships in as close as Adm. Parker ordered, for they feared running aground. The full effect of their gunnery, which the British ships were capable of bringing to bear, was lost. The sally, which was planned to exploit the unfinished sides of the fort failed when the tide changed and the ships ran aground on the shoal.

In the meantime, the inexperienced gunners of the palmetto fort, who had been trained as infantrymen, were pouring a deadly fire into the British fleet and demonstrating courage and order uncommon in green troops. Their fire was having a terrible effect on the ships. Every person on the quarterdeck of the HMS Bristol, the flagship of the fleet, was killed or wounded. Lord William Campbell, South Carolina's royal governor, manning a gun on that shop was wounded by splinter, a wound which caused his death 2 years later. Adm. Parker was also wounded by a splinter which tore off his pants. Another splinter wounded his knee and left him unable to walk without aid. The other ships also suffered a number of casualties.

The British continued their bombardment to little effect because of the fort's construction of palmetto logs. Palmetto is soft and spongy and simply absorbed the cannonballs. Meanwhile, the Americans expended roughly 1/7 the amount of powder that the British did, but the slow and steady American fire was quite accurate. 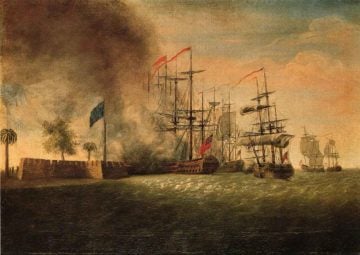 The British also attempted an assault from Long Island by small boats on Col. Thomson's men on the northern end of Sullivan's Island. The attack was covered by an armed British schooner. The boats were turned back when the Americans fired at point-blank range, causing very heavy casualties in the British assault party. With this rebuff, Gen. Clinton called off the attack and no other attempts were made. By 9:30 P.M., all firing ceased, and by 11:30 P.M., the British ships withdrew to Five Fathom Hole.

With their efforts repulsed at both ends of the island, the British halted their attack late in the day. Still, they had a major problem. Of the 3 ships which had run aground, the HMS Acteon was still unable to extract herself, despite the best efforts of her crew. The captain requested Adm. Parker's permission to abandon ship, and destroy her to keep the ship from falling into the hands of the Americans.

Permission was received and the ship's captain set ablaze one of the British Navy's finest ships, commissioned less than a year before. An American salvage party went out to the Bristol after it was abandoned and was able to gather the ship's bell, the colors, and various stores before the spreading fire endangered their safety. Half an hour later, the ship's magazine exploded.

The results of the victory were many-fold. For the Americans, it was their first decisive victory. For South Carolina, it produced a confidence in the government led by John Rutledge and forestalled another British effort to take Charleston for over 3 years. More importantly to both South Carolina and the new nation, this daring feat against odds fired the imagination of its citizens.

Here was the model for future triumph. It was here, in a day-long battle, that a gallant and spirited band defeated in desparate conflict an overwhelming naval and military force and having utterly whipped them, drove them from their shores. For the new nation, pride in the victory was unbounded.

For the British, the results were humiliating. A superb British naval flotilla and army had been thwarted, in a large degree, due to the imprudent mistakes made by veteran officers. Poor planning and the refusal of the army and navy to cooperate sealed the doom of the British. the British lost all element of surprise and failed to take advantage of American weakness in early June. There were no navel officers in the fleet familiar with Charleston harbor. Instead, Parker relied on impressed pilots to guide the ships to their crucial anchorage.

The British did not attempt to renew the battle to try to take the fort again, and by mid-July, the fleet withdrew northward to help the main British army in the campaign against New York. Within days of the battle, the Charlestonians learned of the singing of the Declaration of Independence in Philadelphia which was a sign of their capacity to oppose British arms.

The victory on June 28 stood to them as their own physicial Declaration, which the upsetting of the British plans in the southern colonies helped win uncommitted Americans to the struggle for independence from Great Britain. It also enabled the Southern colonies to support vital campaigns in the North. Most importantly, the victory at Fort Sullivan helped to keep Charleston free from British occupation for more than three years.

Fort Sullivan was renamed Fort Moultrie shortly after the battle in honor of Moultrie, for his successful defense of fort and the city of Charleston.