The Battle of Kip's Bay 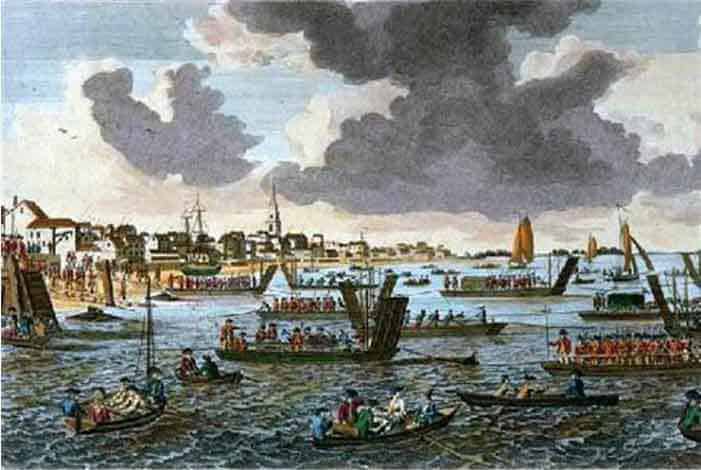 During the Battle of Kip's Bay, heavy advance fire from British ships in the East River caused the inexperienced American militia, guarding the landing area, to flee. This made it possible for the British to land their troops unopposed. Skirmishes in the aftermath of the landing resulted in the British capture of some of those militia.

British maneuvers following the landing very nearly cut off the escape route of some Continental Army forces stationed further southeast on the island. The flight of American troops was so rapid that General George Washington, who was attempting to rally them, was left exposed dangerously close to British lines.

The operation was a British victory, and resulted in the withdrawal of the Continental Army to Harlem Heights, giving the British control of New York City on the lower half of the island. However, Washington established strong positions on Harlem Heights which he proved determined to defend in a fierce skirmish between the two armies the following day. General William Howe, unwilling to risk a costly frontal attack, did not attempt to advance further up the island for another two months.

Facts about the Battle of Kip's Bay

On September 10, British troops moved from Long Island to occupy Montresor's Island, a small island at the mouth of the Harlem River.

On September 11, the Congressional delegation arrived on Staten Island and met with Admiral Lord Howe for several hours. The meeting came to nothing, as Howe was not authorized to grant terms the Congressional delegation insisted on. It did, however, postpone the impending British attack, allowing Washington more time to decide if and where to confront the British force.

On September 12, at a war council, Washington and his generals made the decision to abandon New York City. Four thousand Continentals under Major General Israel Putnam remained to defend the city and lower Manhattan while the main army moved north to Harlem and King's Bridge.

On September 13, major British movement started as the warships HMS Roebuck and HMS Phoenix, along with the frigates HMS Orpheus and HMS Carysfort, moved up the East River and anchored in Bushwick Creek, carrying 148 total cannons and accompanied by six troop transport ships.

By September 14, the Americans were urgently moving stores of ammunition and other materiel, along with American sick, to Orangetown, New York. Every available horse and wagon was employed in what Joseph Reed described as a "grand military exertion". Scouts reported movement in the British army camps but Washington was still uncertain where the British would strike. Late that afternoon, most of the American army had moved north to King's Bridge and Harlem Heights, and Washington followed that night.

Howe had originally planned a landing for September 13. He and General Henry Clinton disagreed on the point of attack, with Clinton arguing that a landing at King's Bridge would have cut Washington off once and for all. Howe originally wanted to make two landings, one at Kip's Bay and another at Horn's Hook, further north on the eastern shore. He struck the latter option when ship's pilots warned of the dangerous waters of the Hell Gate, where the Harlem River and waters of Long Island Sound meet the East River.

After delays due to unfavorable winds, the landing, targeted for Kip's Bay, began on the morning of September 15. 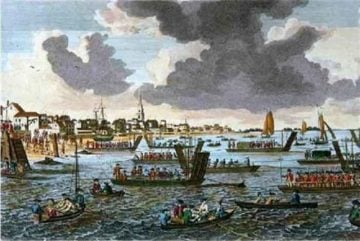 On the morning of September 15, Admiral Richard Howe sent a noisy demonstration of ships up the Hudson River, but Washington and his aides determined that it was a diversion and maintained their forces at the north end of the island. Five hundred Connecticut militia,  commanded by Colonel William Douglas, had erected a crude breastwork on the American line at Kip's Bay, but many of these militia were inexperienced and had no weapons.

After having been awake all night, and having had little or nothing to eat in the previous twenty-four hours, at dawn, the militia looked over their redoubt to see five British warships in the East River near their position. As the militia at Kip's Bay lay in their ditches, the British ships, anchored 200 yards offshore, also lay quiet.

About 10:00 AM, Clinton, to whom Howe had given the task of making the landing, ordered the crossing to begin. A first wave of more than 80 flatboats carried 4,000 British and Hessian soldiers, and entered the East River, heading towards Kip's Bay.

Around 11:00 AM, the five warships began firing at the American breastworks and flattened them. This panicked the Connecticut militia. Nearly 80 guns fired at the shore for a full hour. The Americans were half buried under dirt and sand, and were unable to return fire due to the smoke and dust. After the guns ceased, the British flatboats appeared out of the smoke and headed for shore. By then, the Americans were in a panicked retreat, and the British began their amphibious landing.

Although Washington and his aides arrived from the command post at Harlem Heights soon after the landing began, they were unable to rally the retreating militia. About a mile inland from Kip's Bay, Washington rode his horse among the men, trying to turn them around and impose some order on them, cursing furiously and violently.

When some fleeing Americans refused to turn and engage a party of advancing Hessians, Washington reportedly struck some of their officers with his riding crop. The Hessians shot or bayoneted a number of American troops who were trying to surrender. Two thousand Continental Army troops under the command of Brigadier Generals Samuel Parsons and John Fellows arrived from the north, but at the sight of the chaotic militia retreat, they also turned and fled.

Washington, still in a rage, rode within 100 yards of the British before his aides managed to get him off the field. More and more British soldiers came ashore, including light infantry, grenadiers, and Hessian Jägers. They spread out, advancing in several directions. By late afternoon another 9,000 British troops had landed at Kip's Bay, and Howe had sent a brigade toward New York City, officially taking possession.

While most of the Americans managed to escape to the north, not all got away. The British southern advance pushed for a half mile to Watts farm before meeting stiff American resistance.

The British northern advance stopped at the Inclenberg, under orders from Howe to wait for the rest of his force. This was extremely fortunate for the American troops south of the invasion point. Had Clinton continued west to the Hudson River, he would have cut off Putnam's troops, nearly one third of Washington's forces, from the main army, trapping them in lower Manhattan.

The British were welcomed by the remaining New York City populationg. Gen. Howe, who had wanted to capture New York quickly and with little bloodshed, considered the invasion a complete success. Not wanting to continue battling with the Patriots that day, Howe stopped his troops short of Harlem.

The Battle of Kip’s Bay placed New York City firmly in British hands, where it would remain for the course of the war. The city’s already large Loyalist population grew; other like-minded Americans fled there for protection.

Washington was extremely angry with his troops' conduct, calling their actions "shameful" and "scandalous". The Connecticut militia were labeled cowards and held to blame for the rout. However, others were more circumspect, thinking if the Connecticut militia would have stayed to defend York Island under the withering British cannon fire and in the face of overwhelming force, they would have been annihilated.

On September 16, there was further fighting when a clash of outposts escalated into a running battle below Washington's lines on Harlem Heights. After several hours exchange of musketry, the forces engaged returned to their start lines, and the position of the two armies on Manhattan remained relatively unchanged for the next two months.

Having held their own against picked British troops, the American army received a much needed boost to their morale after the debâcle of the previous day, while the British acquired a renewed respect for the American ability to stand and fight.