The Battle of Fort Washington 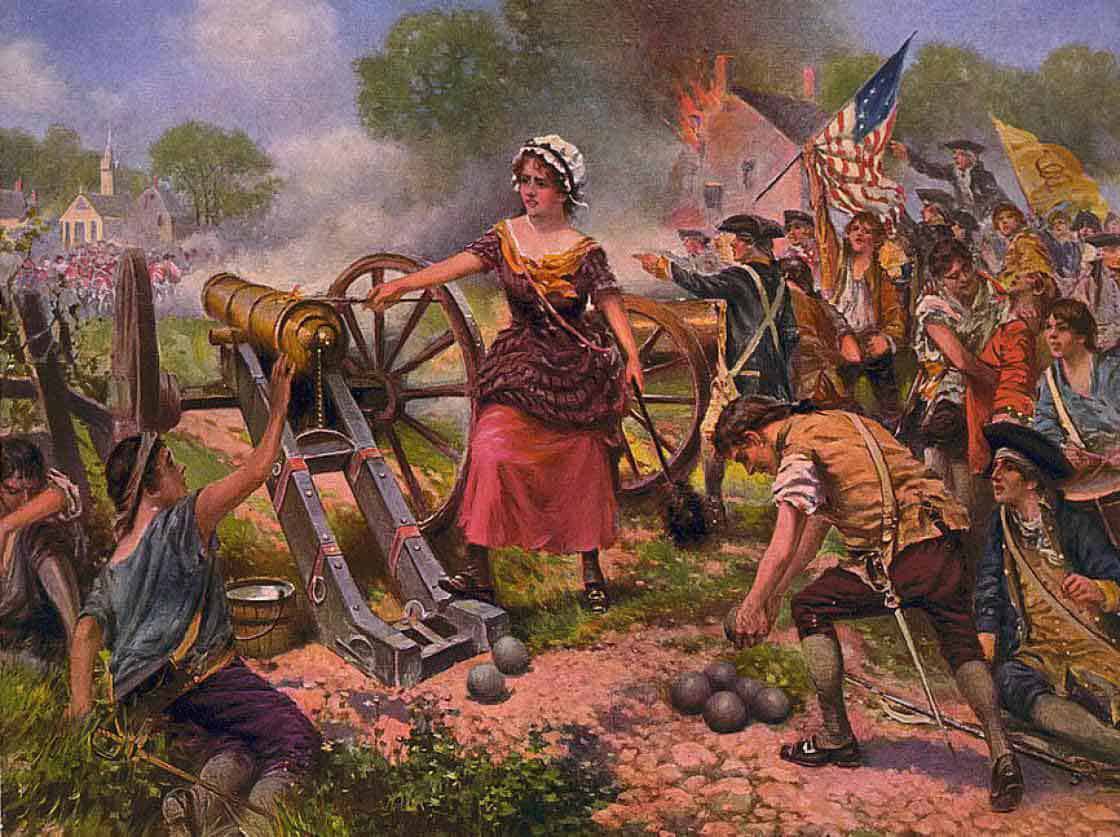 Fort Washington was a fort located at the northernmost tip and highest elevation of what is now the borough of Manhattan in New York City, overlooking the Hudson River, which was held by American forces. Along with Fort Lee, located just across the river in New Jersey atop the Palisades, the twin forts were intended to protect the lower Hudson River from British warships during the New York and New Jersy campaign in the summer and autumn of 1776.

During the fighting on and around Manhattan, the American Army commanded by General George Washington—for whom the fort was named—was forced to withdraw northward, leaving both Forts Washington and Lee isolated. After defeating the Continental Army at the Battle of White Plains, the British Army forces,commanded by of Lieutenant General William Howe, planned to capture Fort Washington, the last American stronghold on Manhattan.

Washington issued a discretionary order to Major General Nathanael Greene to abandon the fort and remove its garrison to New Jersey. Col. Robert Magaw, commanding the fort, declined to abandon it as he believed it could be defended from the British. Howe's forces attacked the fort before Washington reached it to assess the situation.

On November 16, Howe launched his attack. He led an assault from three sides: the north, east and south. Tides in the Harlem River prevented some troops from landing and delayed the attack. When the British moved against the fort's defenses, the southern and western American defenses fell quickly. Patriot forces on the north side offered stiff resistance to the Hessian attack, but they too were eventually overwhelmed. With the fort surrounded by land and sea, Magaw chose to surrender.

After this defeat, most of Washington's army was chased across New Jersey and into Pennsylvania, and the British consolidated their control of New York and eastern New Jersey.

Facts about the Battle of Fort Washington 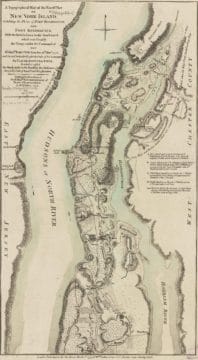 Washington had considered abandoning Fort Washington, but he was swayed by Greene, who believed the fort could be held and that it was vital to do so. Greene argued that holding the fort would keep open communications across the river and might dissuade the British from attacking New Jersey. Magaw and Putnam concurred with Greene. Washington deferred to Greene and did not abandon the fort.

On November 4, Howe ordered his army south toward Dobbs Ferry. Rather than pursue the American forces in the highlands, and possibly prompted by the intelligence acquired by the defection of Demont, Howe had decided to attack Fort Washington.

Washington responded by dividing his army. Seven thousand troops were to remain east of the Hudson River under the command of Major General Charles Lee to prevent a British invasion of New England; Gen. William Heath, with 3,000 men, was to guard the Hudson Highlands to prevent any further British advance north; and Washington, with 2,000 men, was to go to Fort Lee.

On November 13, Washington and his army reached Fort Lee.

Howe's plan of attack was to storm the fort from three directions while a fourth force feinted; by then it had received reinforcements and was garrisoned by 3,000 men. Hessian troops under the command of Lieutenant General Wilhelm von Knyphausen would attack the fort from the north, Percy was to lead a brigade of Hessians and several British battalions from the south, and General Charles Cornwallis with the 33rd Regiment of Foot and Brigadier General Edward Mathew with the light infantry were to attack from the east. The feint was to be by the 42nd Highlanders, who were to land on the east side of Manhattan, south of the fort.

On November 15, before attacking the fort, Howe sent Lieutenant Colonel James Patterson under a flag of truce to deliver a message that if the fort did not surrender, the entire garrison would be killed. Magaw said the Patriots would defend the fort to the "last extremity". 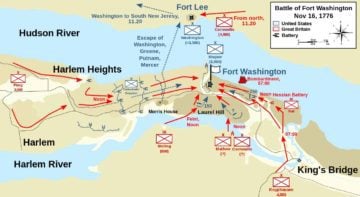 On November 16, before dawn, the British and Hessian troops moved out. Gen. Knyphausen and his troops were ferried across the Harlem River on flatboats and landed on Manhattan. The flatboatmen then turned down the river to ferry Mathew's troops across the river. However, due to the tide, they were unable to get close enough to the shore to bring the British troops across.Thus, Knyphausen's troops were forced to halt their advance and wait until Mathew could cross.

Around 7:00 AM, Hessian guns opened fire on the American battery on Laurel Hill, and the British frigate HMS Pearl began to fire at the American entrenchments. Also, south of the fort, Percy had his artillery open fire on the fort itself. Percy's artillery aimed at Magaw's guns.

By noon, Knyphausen and his Hessians restarted their advance. As soon as the tide was high enough, Mathew and his troops, accompanied by Howe, were ferried across the Harlem River. They landed under heavy fire from the American artillery on the Manhattan shore. The British troops charged up the hillside and dispersed the Americans until they reached a redoubt defended by some Pennsylvania Volunteer companies. After brief fighting, the Americans turned and ran towards the fort. 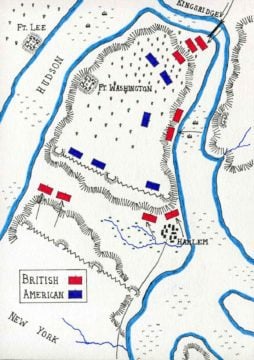 Map of the Battle of Fort Washington

To the north of the fort, the Hessian right, commanded by Col. Johann Rall, moved up the steep hillside south of Spuyten Duyvil Creek against almost no American resistance.The Hessians began to bring up their artillery. At this point, the main body of Hessians began to advance down the Post Road, which ran between Laurel Hill and the hill Rall was on.

The Hessians crossed swampy land and when they approached the wooded hillside near the fort, they were fired upon by 250 riflemen of the Maryland and Virginia Rifle Regiment, under the command of Lieutenant Colonel Moses Rawlings. Rawlings' men hid behind rocks and trees and darted from place to place to shoot at the Hessians as they tried to advance through the fallen trees and rocks.The first and second charges by the Hessians were repulsed by Rawlings' riflemen.

John Corbin was in charge of firing a small cannon at the top of a ridge. During an assault by the Hessians, Corbin was killed, leaving his cannon unmanned. Margaret Corbin had been with her husband on the battlefield the entire time, and, after witnessing his death, she immediately took his place at the cannon, continuing to fire until her arm, chest, and jaw were hit by enemy fire, thereby becoming the first known woman combatant in the American Revolution .

Around the same time, to the south, Percy advanced with some 3,000 men. Percy advanced in two columns with his brigade of Hessians on the left and Percy himself leading the right. About 200 yards from the American lines, Percy halted the advance, waiting for the feint by Stirling to take place. Facing Percy was Alexander Graydon and his company. Graydon's superior was Lambert Cadwalader, Magaw's second in command, who was in charge of holding the three defensive lines south of Fort Washington. After hearing that there was a landing on the shore in his rear, Cadwalader sent 50 men to oppose it. The 50 men ran into the feint by Col. Stirling's 42nd Foot of 700 men.

Where Stirling landed happened to be the least defended area of the American defenses, and when Cadwalader heard how many men were there, he sent another 100 men to reinforce the 50 he had sent earlier. The British landing parties spread out, looking for a path through the rough terrain on the landing spot. The Americans took up a position on a hilltop and began firing at the British troops who were still crossing the river, killing or wounding 80 men. The British troops charged the American position, dispersing them. 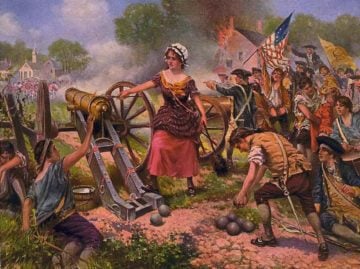 Margaret Corbin at the Battle of Fort Washington

Upon hearing the shooting, Percy ordered his troops to continue their advance. British artillery fire forced Graydon in the first defensive line to fall back to the second line, where Washington, Greene, Putnam and Hugh Mercer were located. The four were encouraged to leave Manhattan, which they did immediately, sailing across the river to Fort Lee.

Magaw realized that Cadwalader was in danger of being surrounded and sent orders for him to withdraw toward the fort. Cadwalader's force was pursued by Percy's troops at the same time the troops opposing Stirling's landing were also being chased back to the fort. Stirling's troops, landed in the rear of Cadwalader, paused, believing that there were troops in the entrenchments. Some of the retreating Americans engaged Stirling, giving most of the rest of the American troops enough time to escape.

With the collapse of Magaw's outer lines to the south and east of the fort, the general retreat towards the perceived safety of the fort took place. To the south, the third defensive line had never been completed so Cadwalader had nowhere left to retreat to except the fort. To the north, the riflemen under Rawlings still held, but barely, as there were fewer riflemen than before and because the increased amount of firing had jammed some of the men's weapons, some of the men were forced to push boulders down the hill at the attacking Hessians.

The American battery at Fort Washington was silenced by the Pearl. By this time, the riflemen's fire had almost ceased, and the Hessians slowly advanced up the hill and engaged the Americans in hand-to-hand fighting. Overpowering the Americans, the Hessians reached the top of the hill and swarmed into the redoubt with a bayonet charge, capturing it quickly.

Washington, who was watching the battle from the other side of the river, sent a note to Magaw asking him to hold out until nightfall, thinking that the troops could be evacuated during the night. By this time, the Hessians had taken the ground between the fort and the Hudson River. Rall was given the honor of requesting the American surrender by Knyphausen. Rall sent Capt. Hohenstein, who spoke English and French, under a flag of truce to call for the fort's surrender. 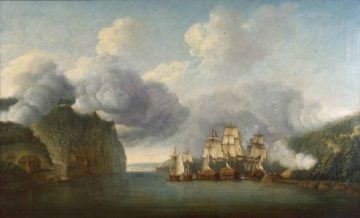 Hohenstein met with Cadwalader, and Cadwalader requested that Magaw be given four hours to consult with his officers. Hohenstein denied the request and gave the Americans a half hour to decide. As Magaw was consulting with his officers, Washington's messenger, Captain John Gooch arrived, just before the fort was completely surrounded, with Washington's request to hold out until nightfall. Magaw attempted to get easier terms for his men, who would only be allowed to keep their belongings, but this failed.

By 3:00 PM, the Germans had reached Fort Washington from the north, and the British were in view on the east and south. Realizing that to stand now would create a bloodbath within the crowded fort, Magaw announced his decision to capitulate the fort..

At 4:00 PM, the American flag was brought down in the fort, replaced by the British flag. The loss of all their arms and equipment was especially damaging. Fort Lee was now untenable and Washington began transporting the ammunition out of the fort.

After the Hessians entered the fort, the American officers attempted to placate the Hessian commander, Captain von Malmburg, who was in charge of the surrender. As they left the fort, the Hessians stripped the American troops of their baggage and beat some of them. Their officers intervened to prevent further injuries or deaths. The British captured 34 cannons, two howitzers, along with many tents, blankets, tools and much ammunition.

Under the usual treatment of prisoners of war during the Revolutionary War, only 800 survived their captivity to be released 18 months later in a prisoner exchange; nearly three-quarters of the prisoners died.

Three days after the fall of Fort Washington, the Patriots abandoned Fort Lee. Washington and the army retreated through New Jersey and crossed the Delaware River into Pennsylvania northwest of Trenton, pursued as far as New Brunswick, New Jersey by British forces.