The Battle of Fort Lee

The battle marked the successful invasion of New Jersey by British and Hessian forces and the subsequent general retreat of the Continental Army during the Revolutionary War.

Fort Lee was rendered defenseless after Continental Army troops holding Fort Washington were defeated and captured. The Royal Navy controlled the Hudson River. General William Howe ordered General Charles Cornwallis to "clear the rebel troops from New Jersey without a major engagement, and to do it quickly before the weather changed." The force included Hessian units commanded by Colonel Carl von Donop.

The invasion of New Jersey began the night of November 19–20, when 5,000 British troops ferried across the Hudson on barges and began landing near New Dock Landing. General George Washington and Major General Nathanael Greene quickly ordered the evacuation of Fort Lee on the morning of November 20.

Facts about the Battle of Fort Lee

Fort Constitution, later named Fort Lee, was constructed atop the New Jersey Palisades. Its sister garrison, Fort Washington, occupied an elevated position across the Hudson River on Manhattan. They were built to cover a line of obstructions across the Hudson River to bar the movement of British ships. Also, they intended to frustrate the British war plan: "Control the Hudson River with the Royal Navy to cut the colonies in two, then suppress the rebellion, first in New England and elsewhere if necessary."

The New Jersey garrison later took the name of Fort Lee to honor Major General Charles Lee, then regarded by many as America’s most able soldier. Ships were sunk in the waters between the two forts as an additional means to prevent British passage on the Hudson. Fort Lee, however, never saw the opportunity to play its intended role.

On November 16, the British captured Fort Washington, the larger and stronger of the two forts. With this, Fort Lee was no longer worth defending. 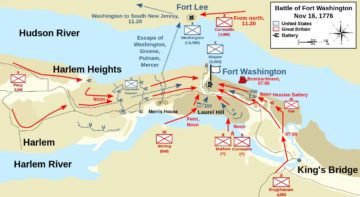 On November 20, Howe ordered Cornwallis to capture Fort Lee. The plan was to trap the American army between the Hackensack River and the Hudson River. With a force of 4,000-6,000 British soldiers, Cornwallis crossed the Hudson River in a rainstorm and landed about 6 miles north of the fort and marched south.

Washington sent word of the British advance to the Continental Congress and suggested that Philadelphia would likely become the next target. The news came as a shock to many of the delegates, who had failed to grasp how badly the war was going.

When Cornwallis’s forces arrived at Fort Lee, they encountered no opposition. Greene had led a hurried evacuation of the fort's 2,000-man garrison and marched them toward Hackensack, where Washington was waiting on them.

By deciding to leave everything else at the fort, Greene was able to march his men to safety before the British could seize the one bridge across the Hackensack River. Greene returned to the fort about two hours after the main body left and rounded up several hundred stragglers.

The British were delighted at what they found at the abandoned fort. They found 50 cannon, 1,000 barrels of flour, stores of ammunition, and vast quantities of other supplies left behind by the fleeing Americans. They captured 12 drunk American soldiers in the fort and about 150 other prisoners were taken in the vicinity. Believing he had to the opportunity to strike a decisive blow against the Americans,  Cornwallis pursued Washington’s army.

The American soldiers then began a hasty retreat west, crossing the Hackensack River at New Bridge Landing and the Passaic River at Acquackanonk Bridge. It was during Washington's retreat that Thomas Paine composed his pamphlet, "The American Crisis", which began with the recognized phrase, "These are the times that try men's souls".