The Battle of Great Bridge 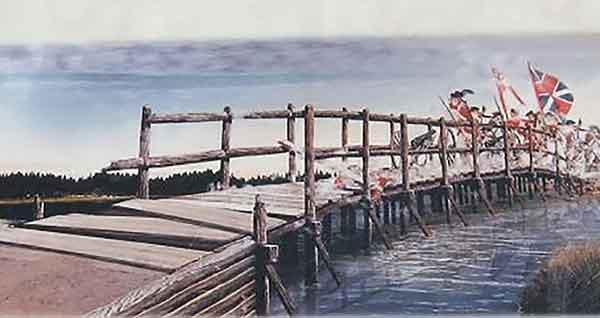 In early 1775, following increasing political and military tensions in the Colony of Virginia, both Royal Governor Lord Dunmore and American leaders both recruited troops and engaged in a struggle for available military supplies in the area. The struggle eventually focused on the city of Norfolk.

Dunmore's forces had fortified one side of a critical crossing on the Elizabeth River, south of Norfolk at Great Bridge, the shipping point of supplies to nearby Norfolk. Finding resistance increasing, Dunmore built a stockade on the north  side of the bridge.

On December 2, the Colonel Woodford and the American troops arrived at Great Bridge and set up a camp across the bridge from the British fort, where he began entrenching his position. Concerned for the safety of the British garrison, Dunmore decided an immediate attack on the American position was necessary.

Dunmore's plan called for a diversionary attack at a spot downriver from the bridge to draw the American militia's attention, while the British garrison, reinforced by additional British troops from Norfolk, would attack across the bridge in the early morning light.

Facts about the Battle of Great Bridge 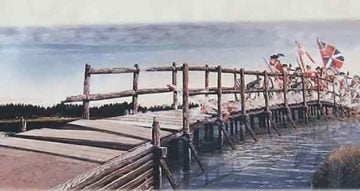 On the night and morning of December 8 and 9, British Capt. Samuel Leslie led reinforcements down to Fort Murray, arriving around 3:00 am. Upon his arrival, he learned that the detachment intended for the diversion was not in the fort. He decided to proceed with the attack anyway.

After resting his troops until a little before dawn, Capt. Leslie sent men out to replace the bridge planking. Once this was finished, Capt. Charles Fordyce led a British company across the bridge. They briefly skirmished with American militia sentries, raising the alarm in the American camp beyond the entrenchments. Fordyce's men were then joined by a company of navy gunners who had been brought along to operate the field artillery for the attack, while the Tory companies arrayed themselves on the Norfolk side of the bridge.

The American militia leadership in the camp at first thought the early skirmishing was a typical morning salute, and paid it little heed. Shortly after reveille, the severity of the alarm became apparent. While the camp mobilized, a militia company prepared for the British advance behind the earthworks.

The Americans carefully withheld fire until the British were within 50 yards, and then unleashed a torrent of fire on the column. Capt.  Fordyce, leading the British column, went down just steps from the earthworks along with many of the men in the front ranks. The advance dissolved as the militia musket fire continued.

About half of Capt. Fordyce's force was killed, and many were injured. The British cannons provided covering fire as they retreated back across the bridge, but they made no impression on the American earthworks.

Col. Woodford had by this time organized the forces in his camp, and they marched out to face the British. After an inconsequential exchange of fire at long range, Woodford sent some riflemen off to the left. From this position, they began to fire on the British position on the far side of the bridge.

The British gunners, whose cannons were the only weapons available to contest the American riflemen at that range, were now out of position. They were also being threatened by the large American militia force approaching the earthworks. The British spiked their cannons and retreated across the bridge, and Capt. Leslie ordered his men to retreat into Fort Murray.

In some 25 minutes, Lord Dunmore's attempt to stop the American troop buildup near Norfolk had been emphatically turned back.

The British retreated to Norfolk, at the time a Tory center. In the following days, Dunmore and his Tory supporters took refuge on ships of the Royal Navy, and Norfolk was occupied by the victorious American forces.

The Battle of Great Bridge resulted in the end of British Colonial government of the colony. Woodford wrote: "This was a second Bunker's Hill affair, in miniature; with this difference, that we kept our post, and had only one man wounded in the hand." Lord Dunmore blamed Captain Leslie for his decision to attack without the accompanying diversion, although the outcome of the battle may not have been different even with the diversion, given the disparity in force sizes.

This battle was responsible for removing Dunmore and any other vestige of English Government for the Colony of Virginia during the early days of the Revolutionary War.

By the time General George Washington had written the Continental Congress from New England, Woodford was able to report to Edmund Pendleton, president of the Convention at Williamsburg, that he and Colonel Robert Howe were in complete command in Norfolk.

After a series of escalations over the rebel's refusal to allow provisions to be delivered to the overcrowded vessels, Dunmore and Commodore Henry Pellow decided to bombard Norfolk.

On January 1, 1776, Norfolk was destroyed in action begun by Royal Navy ships and their landing parties, but completed by American troops that continued to loot and burn the former Tory stronghold